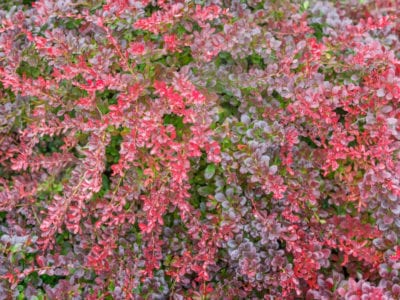 Japanese barberry was introduced to North America from its native Japan around 1875 for use as an ornamental. Since then it has easily adapted and acclimated to many natural areas where it is considered invasive, which makes Japanese barberry control and management a priority. There are several reasons controlling Japanese barberry is imperative, but with its spiny branching and tendency to thicket, the question is how to get rid of it. The following discusses Japanese barberry removal.

Why is Controlling Japanese Barberry Important?

Japanese barberry (Berberis thunbergii) has escaped its original landscape confines, and now ranges from Nova Scotia south to North Carolina and west to Montana. It thrives in not only full sun but deep shade as well. It leafs out early and retains its leaves late into the fall while forming dense thickets that shade out native species.

Not only are native plants in peril, but Japanese barberry has been shown to have a role in the spread of Lyme disease. Scientists have discovered that the populations of white footed deer mice and their larval hosts, deer ticks increase near stands of Japanese barberry.

Japanese barberry reproduces via seed, underground shoots and at the tips of branches when they touch the earth, which all means that this invasive plant easily propagates. Even shrubs damaged by cutting or fire will easily re-sprout.

The main method for controlling Japanese barberry is hand pulling or digging, which must be done early in the season before seed drops. The one bright spot here is that Japanese barberry leafs out earlier than native plants, making it stand out.

Once an area has been cleared of barberry in the above manner, consistent mowing or weed whacking should keep the growth contained.

If all else fails, chemical herbicides can be an effective method of Japanese barberry management.

Printer Friendly Version
Read more about Barberry
<Previous
Did you find this helpful? Share it with your friends!
FacebookTweetPinEmail
Related Articles
Newest Articles
You might also like…
Additional Help & Information