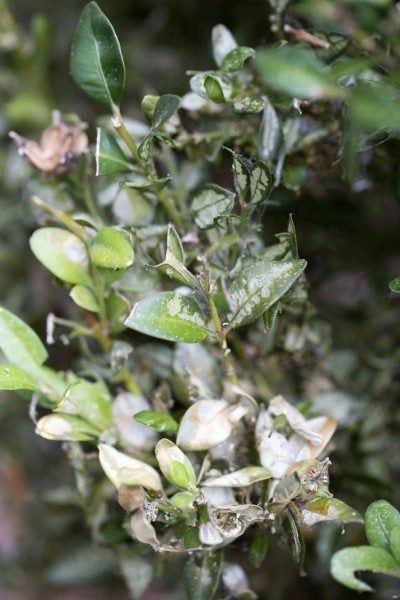 Boxwoods (Buxus spp) are small, evergreen shrubs that are commonly seen utilized as hedges and border plants. While they are quite hardy and are adaptable in several climatic zones, it is not uncommon for the plants to be afflicted with common boxwood shrub pests. While many of the unwanted pests are benign, in some cases, controlling boxwood insects is paramount to the continued health of the plant. The following article contains information regarding common boxwood pests and treating bugs on boxwoods.

Boxwoods are generally easy-care shrubs that can be grown in either full sun or shade and are predominantly used for small to medium-sized hedges. Despite their ease of care, many insects thrive on boxwood bushes.

The most detrimental pest of boxwoods is the boxwood leafminer. It is a small fly that is indigenous to Europe but is now found throughout the United States. Both adults and their larvae cause serious damage to the boxwood foliage in the form of blistering and discoloration.

The adult leafminers are about 0.1 inches (0.25 cm.) long and fragile looking. They are orange-yellow to red. In May, the tiny (0.125 inch (0.3 cm.) long) larvae become orange-colored pupae and emerge as a fly. Adults mate and then the female lays her eggs deep inside the leaf tissue. Eggs hatch three weeks later and the larvae slowly grow as they munch away on the inside of the leaf.

If it’s a little too late for that, you can reduce the population by pruning prior to adult emergence or after eggs are laid.

Some insecticides can be used, but control is difficult, as the application needs to be timed with the emergence of the adults. Sprays containing bifenthrin, carbaryl, cyfluthrin, or malathion can all be used to treat these insects on boxwood bushes.

Eurytetranychus buxi is a spider mite – the boxwood mite to be exact. These boxwood shrub pests feed on the underside of the leaves, leaving them stippled with tiny white or yellow spots. Both European and American boxwoods are susceptible to boxwood mites. Japanese boxwood is a bit more resistant. High nitrogen fertilizer applications coincide with large populations of boxwood mites.

As with other types of spider mites, these pests overwinter as eggs on the underside of the leaves. They then hatch in May with another generation on the way in 2-3 weeks. Since this means multiple generations per year, treating these bugs on boxwoods is imperative as early in the season as possible. The mites are most active in the spring and early summer and at their worst when conditions are dry and dusty. Complete defoliation can occur if the infestation is heavy.

To treat boxwood mites, you can try and wash them from the plants with a stream of water. Also, horticultural oil is effective. For an aggressive treatment, apply products containing abamectin, bifenthrin, malathion, or oxythioquinox in the first two weeks of May to get a jump on the population.

Another common insect marauder is the boxwood psyllid (Cacopsylla busi). While this is a less serious pest than the above mentioned, it can still wreak plenty of havoc on your boxwoods. The damage is purely cosmetic with cupping of leaves and affected twig growth. The psyllid afflicts all boxwoods, but the American boxwood is most susceptible.

Like the spider mite, the boxwood psyllid overwinters as a tiny, orange egg that hatches in the spring when the buds of the plant open. The nymphs begin feeding on the plant right away. At this stage, the insects damage the plant, causing the leaves to cup. The cupping provides a hiding place for the psyllid as well as protection. They become winged adults by early June and then mate. The females lay their eggs between the bud scales of the boxwood to overwinter until the next spring. There is one population per year.

To control psyllids, apply the same insecticides mentioned above in early May when the young have hatched.

The aforementioned are the three most common insect invaders on boxwoods, but there are other damaging pests as well.

Boxwoods are susceptible to parasitic nematodes, which cause leaf bronzing, stunted growth, and the general decline of the shrub. There are several types of these nematodes. American boxwood is resistant to root-knot nematodes but tolerant of stunt nematodes.

Once you have nematodes, you have them. The goal is to minimize the population as much as possible. Grow plants that are unaffected by nematodes to reduce the population and be consistent with care – fertilize, mulch and water on a regular basis to keep the overall health of the plant stable.

Less damaging, but no less irritating, on occasion are infestations of scale, mealybugs, and whiteflies. Scale and whitefly are both sucking insects that cause various marring on the leaves of the boxwood but are otherwise fairly benign.

Mealybugs exude honeydew, which is attractive to ants, so you are likely to have at least two infestations to deal with. Mealybugs are difficult to control with insecticides. Naturally occurring predators and parasites can aid in controlling the population. Also, the application of insecticidal soap, narrow-range oil, or even a forceful stream of water can reduce populations.