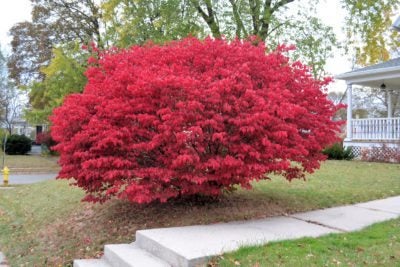 The common name, burning bush, suggests that the plant’s leaves will blaze a fiery red, and that’s exactly what they are supposed to do. If your burning bush does not turn red, it’s a great disappointment. Why won’t burning bush turn red? There is more than one possible answer to that question. Read on for the most likely reasons your burning bush isn’t changing color.

When you buy a young burning bush (Euonymus alata), its leaves may be green. You will often see green burning bush plants in nurseries and garden stores. The leaves always grow in green but then they are supposed to change to red as summer arrives.

If your green burning bush plants stay green, something is amiss. The most likely problem is lack of sufficient sun, but other issues may be at play when your burning bush isn’t changing color.

It’s hard to wake up day after day in summer and see that your burning bush stays green instead of living up to its fiery name. So why won’t burning bush turn red?

The most likely culprit is the plant’s location. Is it planted in full sun, partial sun, or shade? Although the plant can thrive in any of these exposures, it requires a full six hours of direct sun for the foliage to turn red. If you’ve planted it in a site with partial sun, you may see one side of the foliage blushing. However, the rest of the burning bush isn’t changing color. Green or partially green burning bush plants are usually shrubs that do not get the sunshine they need.

If a burning bush does not turn red, it may not be a burning bush at all. The scientific name for burning bush is Euonymus alata. Other plant species in the Euonymus genus look very similar to burning bush when young, but never turn red. If you have a grouping of burning bush plants and one stays completely green while the others blaze red, you might have been sold a different species. You could ask at the place you purchased it.

Another possibility is that the plant is still too young. The red coloration does seem to increase with the shrub’s maturity, so hold out hope.

Then, unfortunately, there is the unsatisfying response that some of these plants just don’t seem to turn red no matter what you do. Some turn pink and an occasional burning bush stays green.