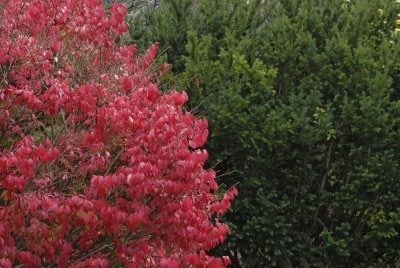 Gardeners who want a burst of crimson color in fall should learn how to grow a burning bush (Euonymus alatus). The plant is from a large group of shrubs and small trees in the genus Euonymous. Native to Asia, this large bush has a natural open form that shows well in borders, beds and even containers. Almost any site and soil condition is sufficient when growing burning bush plants. Care of burning bush is minimal too, which makes the plant an excellent choice for even novice gardeners.

The arching stems are decorated with clusters of finely pointed leaves that droop appealingly from the branch. The plant is also called winged Euonymous because of the ridges that arise on young burning bush growth. These disappear after the stems mature.

The plant will get tiny flowers in May to June that turn into tiny dangling red berries. Birds eat the berries and inadvertently plant the seeds in your garden. In rich soils, even dropped berries may sprout and become new plants.

You can plant a dwarf form of the bush in small spaces or to minimize maintenance, especially since the plant’s 15-foot (4.5 m.) height may be too great for some landscape applications. There are two excellent cultivars, which produce smaller, dwarf forms of this bright Euonymous:

How to Grow a Burning Bush

Burning bush grows well in USDA plant hardiness zones 4 to 8 but can become invasive in the warmer ranges. Burning bush plants may get 9 to 15 feet (2.5 – 4.5 m.) tall and are suitable for full sun to partial sun locations.

Any soil type, including alkaline, may support burning bush growth. However, when growing burning bush, it’s best to place the shrub in sites with excellent drainage but lightly moist soil.

There is little to know about caring for burning bush, as this plant is versatile and hardy. In fact, no special care of burning bush is required for a splendid color display. The plant produces only on early flush of new growth in spring, so you should apply fertilizer very early to maximize the effect.

Burning bush care also includes occasional pruning to keep the size down and remove any broken or damaged branches. The natural shape of the bush is appealing, so pruning is not necessary, but if you wish to trim the plant, do so in very early spring before leaves appear.

The plant has few pest problems or disease except some foliar fungal issues. Reduce overhead watering to combat fungal problems. Burning bush plants are occasionally susceptible to scale insects. These are scab-like white insects that only move around during the development phase. They are sucking insects that can reduce the vigor of the plant if they are in large populations. Scrape, rinse and control them with horticultural oil sprays or neem oil.