Buttercup Bush
By: Becca Badgett, Co-author of How to Grow an EMERGENCY Garden
Printer Friendly Version 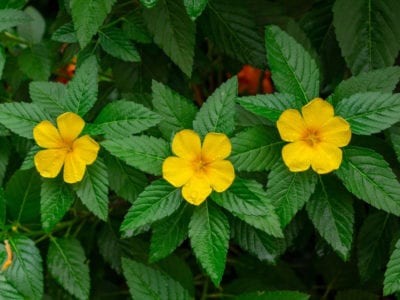 Yellow, five petaled, buttercup-like flowers bloom prolifically on the buttercup bush, also commonly called Cuban buttercup or yellow alder. Growing buttercup bushes provides continued blossoms in USDA gardening zones 9 through 11. Botanically called Turnera ulmifolia, this spreading groundcover or small shrub brightens up bare spots in the landscape with flowers that bloom in the mornings and last most of the day.

Native to the Caribbean, the Cuban buttercup is the official flower of Cienfuegos, Cuba. The buttercup bush is one of the plants to first appear on sandy beaches after they’ve been ravaged by hurricanes. It is a perennial and reseeds readily.

The rewards of growing buttercup bushes are not only the abundant flowers, but the attractive, oval shaped, serrated evergreen foliage, which is fragrant. The Cuban buttercup attracts butterflies as well and is at home spreading between taller plants in the butterfly garden.

Moderately fast-growing buttercup bushes reach 2 to 3 feet (61-91 cm.) in height and the same in spread to brighten up areas of the flower bed or natural area. The Cuban buttercup flowers best in a full sun location, but also provides the perky yellow flowers in a lightly shaded area.

Now that you’ve learned the pros and cons of growing buttercup bushes, you can grow them if they sprout in your landscape, propagate them, or remove young sprouts to eliminate the possibility of invasion.