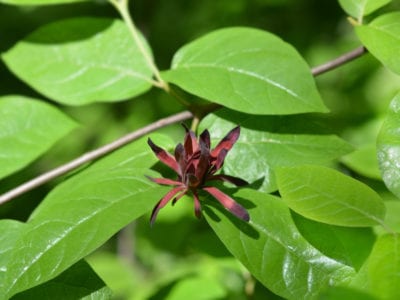 You don’t often see Carolina allspice shrubs (Calycanthus floridus) in cultivated landscapes, possibly because the flowers are usually hidden beneath the outer layer of foliage. Whether you can see them or not, you’ll enjoy the fruity fragrance when the maroon to rusty brown flowers bloom in mid-spring. A few of the cultivars have yellow flowers.

The foliage is also fragrant when crushed. Both the flowers and leaves are used to make potpourris; and in the past, they were used in dresser drawers and trunks to keep clothes and linens smelling fresh.

Growing allspice bushes is easy. They adapt well to most soils and thrive in a variety of climates. The shrubs are hardy in U.S. Department of Agriculture hardiness zones 5b through 10a.

Carolina allspice shrubs grow in any exposure from full sun to shade. They aren’t picky about the soil. Alkaline and wet soils aren’t a problem, although they prefer good drainage. They also tolerate strong winds, making them useful as a windbreak.

The method of pruning a Carolina allspice bush depends upon how you use it. The shrub makes a good deciduous hedge and can be sheared to maintain the shape. In shrub borders and as specimens, thin Carolina allspice to several upright branches arising from the ground. If left untrimmed, expect a height of 9 feet (3 m.) with a spread of 12 feet (4 m.). The shrubs can be pruned to shorter heights for use as a foundation plant.

Part of Carolina allspice plant care involves protection from disease issues. Watch for bacterial crown gall, which causes a warty growth at the soil line. Unfortunately, there is no cure and the plant should be destroyed to prevent the spread of the disease. Once a shrub is affected, the soil is contaminated so don’t replace another Carolina allspice shrub in the same location.

Carolina allspice is also susceptible to powdery mildew. The presence of the disease usually means that the air circulation around the plant is poor. Thin out some of the stems to allow air to move freely through the plant. If air is blocked by nearby plants, consider thinning them as well.