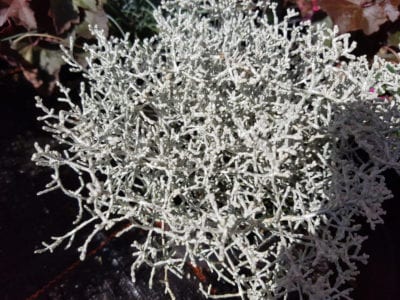 Cushion bush, also known as silver bush (Calocephalus brownii syn. Leucophyta brownii) is a very tough and attractive perennial, native to the southern coast of Australia and nearby islands. It’s very popular in pots, borders, and larger clumps in the garden, most notably because of its striking silver to white color. Keep reading to learn more about how to grow a cushion bush and cushion bush growing conditions.

Cushion bush does produce small yellow flowers on the tips of its stems, but most gardeners grow the plant for its foliage. The stems grow thick and outward in a shape very much like a tumbleweed, and the soft leaves stay close to the stems.

Both stems and leaves are a bright silver, almost white color that reflects light very well and makes for a spectacular contrast against neighboring green plants. Bushes are round and tend to reach between 1 and 3 feet (31-91 cm.) in height and width, though they can reach as much as 4 feet (1 m.).

How to Grow a Cushion Bush

Silver cushion bush is native to the southern coast of Australia, which means it does very well in salty air and dry, poor soil. In fact, one of the key elements of cushion bush care is not fussing over it too much.

Ideal cushion bush growing conditions include extremely well-draining soil, full sun, and little water. During hot, dry spells and when it’s first getting established, however, it will benefit from being watered once a week.

Silver cushion bush does not need to be fertilized and actually performs well in poor soil that’s low in nutrients.

With all its beauty, though, this plant has a relatively short lifespan and bushes may need to be replaced every couple of years.