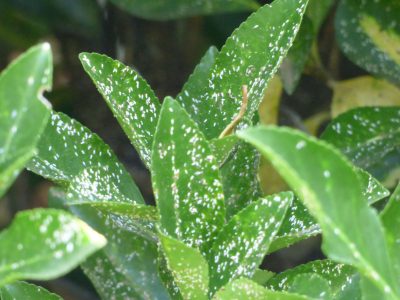 Euonymus is a family of shrubs, small trees, and vines that is a very popular ornamental choice in many gardens. One common and sometimes devastating pest that targets these plants is the euonymus scale. Controlling euonymus scale bugs can be relatively simple and effective, as long as it’s done properly. Keep reading to learn more about how to get rid of euonymus scale.

If the infestation is really bad, the plant may appear water-stressed with leaves yellowing, drooping, and even falling off. The bugs themselves are most visible in their late life scale stage, when they settle in on a single spot on the plant and grow a hard protective shell (a scale) over their backs. The larger female scales are about 2 mm long, brown, and shaped like an oyster shell. The scale insects may also appear like clusters of rice on plant leaves.

If you notice scales on your plant, scrape at a few with your fingernail. If you see an orange smear, the scales are still alive and need to be dealt with. If the scales simply crumble away dryly, all you have is the leftover shells of dead bugs and you don’t need to treat them.

Though they’re very small, you can see the crawlers as tiny yellow grubs on the leaves. During this time, you can spray with an insecticide or horticultural oil. If you miss this crawler stage, another should occur 6 weeks later.

A more organic form of treatment is the introduction of lady beetles, natural predators of euonymus scale, as well as pruning of heavily infested branches.

Certain horticultural oils can also be used when the scales are in their shells because it forms a layer that literally suffocates them. Read the label of your oil to see if it will be effective on mature scales.

Printer Friendly Version
Read more about Euonymus
<PreviousNext>
Did you find this helpful? Share it with your friends!
FacebookTweetPinEmail
Related Articles
Newest Articles
You might also like…
Additional Help & Information