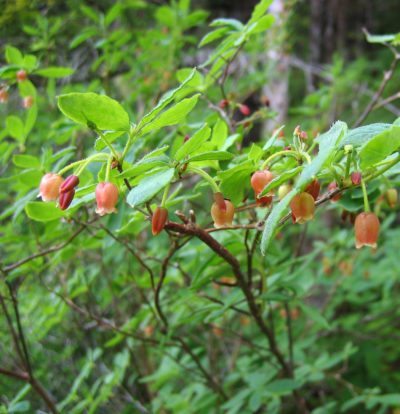 You may know and love azaleas, but how about its kissing kin, false azalea? What is false azalea? It’s actually not an azalea relative at all, but a shrub with the scientific name Menziesia ferruginea. Despite its common name, false azalea, also called fool’s huckleberry plant, is a great little shrub worthy of considering for your garden. To learn more about how to grow false azalea, read on.

What is False Azalea?

If you need a deciduous shrub for your shade garden, don’t be put off by the common names of Menziesia ferruginea. It can’t be blamed because of its resemblance to azalea or huckleberry plants. This shubby flowering plant thrives in moist shady areas, growing to 12 feet (4 m.) tall. The loosely grouped, spreading branching can make it a little straggly.

The shrub produces oodles of small, upside-down, urn-shaped coral or yellow flowers in summer. They are attractive on the plant, but if you crush them, they smell like a skunk. Recognize this shrub by its wavy-edged leaves that appear in clusters on mahogany-colored stems. Careful though, the leaves as well as the stems are sticky to the touch.

The flowers develop into fruits in late summer. They look like woody capsules. When they are ripe, each one splits into four sections and releases the seeds.

If you are thinking of growing false azalea or fool’s huckleberry plant, you’ll have the easiest time in the Pacific Northwest. Fool’s huckleberry plant is native to the forests of this region. Look for wild false azalea on steep slopes with northern exposure from Alaska down to northern California, and east to parts of Montana. That’s where the plants find the abundant moisture they need to thrive. They also grow in the wild on cut-over forest land.

Fool’s huckleberry care is simple if you grow the shrubs in their native range. How to grow false azalea in other locations? Mimic the cool, wet conditions in the Washington and Oregon forests. Growing false azalea in a shady, moist area works well as long as you pick a site with well-draining, slightly acidic soil. The main elements of fool’s huckleberry care are locating the plant appropriately and providing some water in dry stretches.