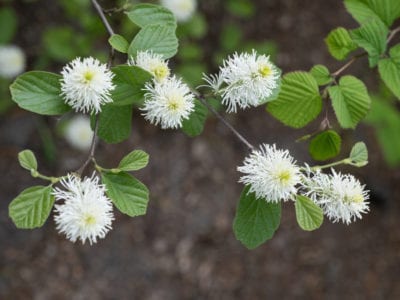 One of the reasons Fothergilla shrubs are so popular amongst gardeners is because they are so low maintenance and beautiful. The Fothergilla is very similar to witch-hazel and is native to southeast United States. They can be grown in other regions as well though, including areas with dry conditions.

The flowers that grow on this shrub are white and showy with a delicious fragrance. They have abundant blooms in spring, summer, and fall. In the spring, the blooms are eye-catching and plentiful. In the summer, there is full foliage with the ivory-white flowers. In the fall, they show vibrant, fiery colors of purple, red, yellow, and orange.

There are two major Fothergilla species: F. major and F. gardenia. Both are suckering, deciduous shrubs. There was another species – F. malloryi — but it is now extinct. Yet another species is F. monticola, but it is generally just part of the F. major species. These Fothergilla varieties are native to swamps and woodlands of the southeastern states of the United States.

Fothergillas prefer to be in the sun at all times, but they can thrive in just a little bit of shade. They need a medium-grade soil with a 5.0-6.0 pH and plenty of organic matter. Although they like moist soil, these shrubs do not do well in soggy locations where their feet get wet. They need medium moisture and soil that can drain well.

The Fothergilla plant does not require pruning at any time. In fact, pruning one of these shrubs is actually very much frowned upon. Many believe that Fothergilla pruning actually takes away from the shrub’s beauty and natural shape.

How to Plant Fothergilla Shrubs

Plant the crown of the plant at soil level and be sure that you provide plenty of water. Soil should be kept moist until the Fothergilla is well established. At this time, the soil only needs to be watered when it is dry. Make certain to take rainfall into consideration when watering.

About 3 to 4 inches (7.5-10 cm.) of mulch placed over the area where the Fothergilla was planted will help to retain moisture and protect the plant. Make certain that the mulch does not touch the stems of the Fothergilla shrub.