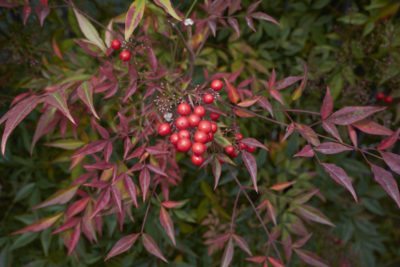 If you want a tall easy-care shrub with showy flowers that doesn’t require much water, how about Nandina domestiica? Gardeners are so thrilled with their nandina that they call it “heavenly bamboo.’ However, nandina plants can get leggy as they grow taller. Pruning heavenly bamboo plants keeps these foundation shrubs dense and bushy. If you want to learn how to prune nandina, we’ll give you the top tips on cutting back heavenly bamboo.

Despite the common name, nandina plants are not bamboo at all, but they resemble it. These tall shrubs are both stiffly upright and very graceful. Adding them to your garden adds texture and an oriental touch.

Although you probably need to prune heavenly bamboo to keep it looking its best, the shrub offers so much in return. It is evergreen and provides ornamental features in every season. In spring and summer, it offers frothy white flowers that turn to bright berries in autumn and winter. Nandina’s leaves turn red in the fall as well, while new foliage grows in bronze.

You’ll find that heavenly bamboo comes in different sizes. Dwarf cultivars are available that stay under 5 feet (1.5 m.) tall. Other shrubs can get to 10 feet (3 m.) tall. They have a lovely, natural shape and it is a mistake to try to shear them into shapes. Pruning heavenly bamboo plants to keep them bushy is worth the effort. Nandina plant pruning allows for a fuller plant.

How to Prune Nandina for Density

Keep in mind that pruning heavenly bamboo plants severely is not always necessary. The shrub grows slowly and keeps its shape. An annual pruning in early spring allows taller cultivars to produce new shoots and lacy foliage at lower levels of the trunk.

Keep the rule of thirds in mind. Get out the pruners or loppers in winter or early spring and begin. Start by cutting back heavenly bamboo canes. Take out one-third of the total number at ground level, spacing those you remove evenly throughout the bush.

Then, prune heavenly bamboo stalks – one-third of those remaining – to reduce their height. Snip them off above a leaf or leaf bud about halfway down the cane. As they sprout new growth, they will fill in the plant. Leave the remainder of the plant unpruned.