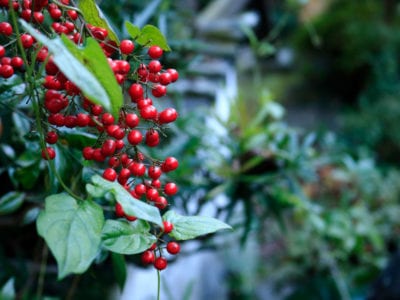 Heavenly bamboo can be anything but heavenly in the landscape. A more apropos adjective might be dreadful, as in dreading dealing with heavenly bamboo invasiveness because, yes, Nandina, which is also comically known as sacred bamboo, has a tendency over time to encroach the surrounding area. That’s why many gardeners want to learn about heavenly bamboo management.

Read on for tips on how to get rid of Nandina.

Nandina is an evergreen to semi-evergreen, woody shrub that grows to around 6-8 feet (1-2.5 m.) in height. Originally from China and Japan, heavenly bamboo was introduced to the States in 1804 for use as an ornamental due to its attractive foliage and lovely berries.

Unfortunately, Nandina also has the attributes of growing rapidly, reproducing via seed and root fragments. While heavenly bamboo isn’t actually bamboo, it is a member of the grass family and is no doubt a reason for heavenly bamboo invasiveness. Thus, many gardeners saddled with the plant seek methods for controlling heavenly bamboo.

Another reason many gardeners want to learn how to get rid of Nandina is the aforementioned berries. While they are pretty, they not only are a method of propagation for the shrub but are also toxic to birds; they contain cyanide and other alkaloids.

If you find your Nandina is overtaking the garden and pushing out other species, you’ve probably decided it’s time to get rid of the plants. The problem here is that Nandina produces practically impenetrable thick roots that expand year after year.

Even if you do manage to chisel them out of the soil, every small piece of root that is left behind will reward you by growing anew! Plus, any seeds left in the soil can germinate long after the plant has been removed.

So, the question of how to get rid of bamboo remains. There are no biological or chemical controls recommended for controlling heavenly bamboo. There are, however, mechanical means such as heavy digging or using a backhoe for controlling heavenly bamboo but, again, any bit of root or berry left behind will certainly propagate and the problem will start up all over again.

How to Get Rid of Nandina

If you have an existing thicket, mechanical means will remove it, but then the plant may pop back up again. Try to remove the plants before they have produced seeds and get out as much root as possible.

Continued vigilance on your part will be needed to assure control of heavenly bamboo. Keep an eye on the area and immediately remove any smaller plants that crop up. Dig them up, don’t pull them, and try to get as much of the root as possible.

Otherwise, in the future, plant native or non-invasive shrubs or the new hybrids of Nandina that are shorter, don’t spread, and lack berries.

Printer Friendly Version
Read more about Heavenly Bamboo
<PreviousNext>
Did you find this helpful? Share it with your friends!
FacebookTweetPinEmail
Related Articles
Newest Articles
You might also like…
Additional Help & Information