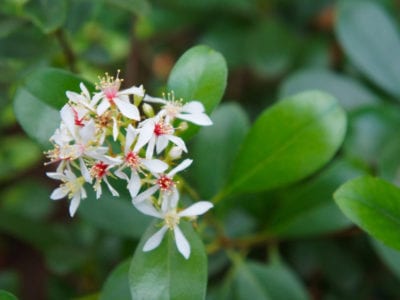 One of the features that make Indian hawthorn plants so easy to grow is that they rarely need pruning. The shrubs have a shape and growth habit that stays neat and compact without much effort on the gardener’s part. Pruning Indian hawthorns is usually limited to removing diseased and damaged parts of the shrub as problems occur, but you might also find it helpful to make an occasional heading or thinning cut. Read on to find out how to prune an Indian hawthorn.

When an Indian hawthorn branch is broken, it’s best to take care of the problem right away by cutting off the stem below the break. A clean cut heals quickly and is less likely to develop disease problems than a ragged break. If you are cutting near the branch tip, any stub of stem between the cut and the nearest bud will eventually die, so make the cut about one-quarter of an inch (6 mm.) above a bud. Choose the bud carefully. After you remove the end of a stem, any new growth will come from the bud, and it will grow in the direction the bud is facing. This type of pruning is called heading.

Diseased and dead stems should be removed immediately to help prevent the spread of the disease. Make the cuts several inches (8 cm.) below the affected area. If the wood in the cut looks discolored, you need to cut a little further down. Don’t hesitate to remove the entire stem if it looks unhealthy.

Sterilize your pruners between cuts if you suspect a disease. Dip the pruners in rubbing alcohol or a household disinfectant and wipe them with a clean cloth. Make sure you wipe them completely dry before putting them away.

When you prune the shrub, you should also look for branches that cross and rub against each other. Constant rubbing causes wounds that provide an entry point for disease organisms and insects. Remove one of the branches, or make a heading cut low enough that the stems won’t rub.