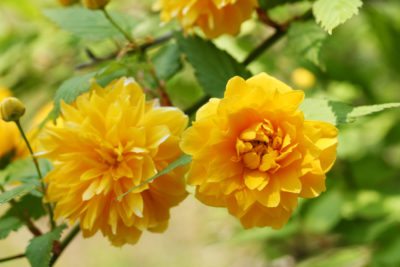 Kerria Japanese rose (Kerria japonica) is a versatile shrub with arching, greenish yellow stems and masses of golden-yellow, chrysanthemum-like flowers that put on a show in spring. The bright green leaves turn yellow in fall, and the stems provide color in the depths of winter, after the deciduous foliage is long gone.

Japanese rose plants grow in moderately fertile, well-drained soil, and don’t perform well in heavy clay. Although Kerria Japanese rose tolerates full sunlight in cool climates, it generally prefers a site in afternoon shade. Too much sunlight causes the shrub to take on a bleached appearance and the flowers tend to fade quickly.

Prune Kerria Japanese rose after blooming to maintain a tidy appearance and promote blooms the following season. Seriously overgrown shrubs can be rejuvenated by cutting the plant to the ground, which improves blooming and creates a fuller, healthier plant.

Removing suckers regularly can keep the plant in check and prevent unwanted growth. However, its spreading nature makes Kerria Japanese rose useful for erosion control, naturalized areas, and mass plantings, as their mounding growth habit is spectacular when the shrub is grown in drifts.

Although Japanese rose plant is relatively well-behaved in most climates, it can become invasive in certain areas, particularly in the eastern and southeastern United States. If this is a concern, it’s always a good idea to check with your local Cooperative Extension office before planting.