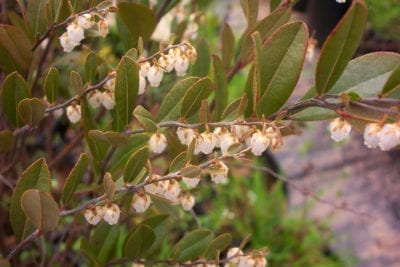 When a plant’s common name is “leatherleaf,” you expect thick, impressive leaves. Those growing leatherleaf shrubs say that is not the case though. The leaves of the leatherleaf are only a few inches (8 cm.) long and only somewhat leathery. What is leatherleaf? To learn more about leatherleaf, otherwise known as Chamaedaphne calyculata, read on. We’ll provide lots of leatherleaf plant info, plus tips on how to grow leatherleaf shrubs.

Thick, leathery leaves are often an adaptation of nature that allows plants to survive searing sun and drought. So it may surprise you to learn that this type of leatherleaf is a bog plant, growing in wetlands in the northeastern part of the country, and up through Canada to Alaska.

According to leatherleaf plant information, this shrub has narrow, somewhat leathery leaves and huge underground rhizomes. These look like thick roots and, in leatherleaf, they extend up to 12 inches (31 cm.) below the ground.

It’s the rhizomes that allow this woody plant to live in a floating bog. Leatherleaf plant information says that these rhizomes anchor the plants. They, in turn, provide stable habitat for other plants to extend the bog mat.

Leatherleaf is useful in many ways to the bog ecosystem, providing cover for nesting ducks. It is a spreading shrub, forming dense thickets. It also produces numerous small, white, bell-shaped flowers in springtime.

How to Grow Leatherleaf Shrubs

If your land contains a bog, marsh, river, or lake, you might want to consider growing leatherleaf shrubs. Since their native habitat is wetlands, you will probably need wet or very moist areas to establish the plant.

That doesn’t mean that you need to live by a swamp to grow leatherleaf shrubs. Their range seems to be expanding and they can be found in the wild in areas not directly next to water. For example, some are found growing in a moist pine savanna, near a lake shore but not on it.

Remember that the leatherleaf is a woody plant, with several stems growing from the rhizome. Perhaps the easiest way to grow the plant is to dig up and transplant the rhizome into an appropriate area.

Once you get the plant established, leatherleaf plant care is easy. Leatherleaf plants take care of themselves and require no fertilization or pest treatment.