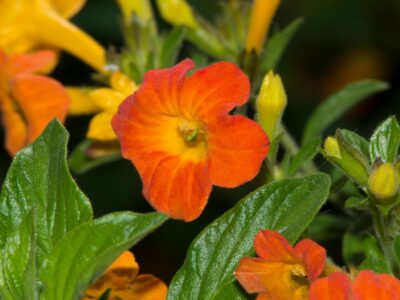 What is a Marmalade Bush?

If you are interested in growing marmalade bushes, you probably are attracted by the brilliant profusion of clusters. The inch-long, trumpet-shaped flowers are a riot of red, bright orange and yellow. This ornamental shrub can grow up to 15 feet (4.5 m.) if given a strong trellis. According to marmalade bush information, it can spread to some 6 feet (1.8 m.) across if left unpruned.

Marmalade bush (Streptosolen jamesonii) is native to Colombia and Ecuador, and grows in the U.S. in the warmest regions. It can thrive in U.S. Department of Agriculture plant hardiness zones 9b through 11.

According to marmalade bush information, the shrub is evergreen and perennial with a spreading habit. The leaves are bright green and glossy. Because of the color of the flowers, the shrub is also given the common name fire bush.

What is a marmalade bush’s role in the garden? You can plant it to spill gracefully over a wall or from a planter. You might also trim it into an upright shape. Either way, you’ll find that marmalade bush care is fairly easy.

How to Grow a Marmalade Bush

If you are interested in growing marmalade bushes, you’ll be happy to hear that the blossoms are not a short-term pleasure. The bush is smothered in flowers most of the year, and attracts both butterflies and bees.

The hardest part might be finding a plant. It’s a relatively rare shrub and you may have to special order it. If you have a neighbor with the bush, you could also propagate it from cuttings.

Once you have a small plant, site in it a warm spot in your garden. For easiest marmalade bush care, plant the shrub in moist, well-drained soil. According to marmalade bush information, the shrub requires ample irrigation.