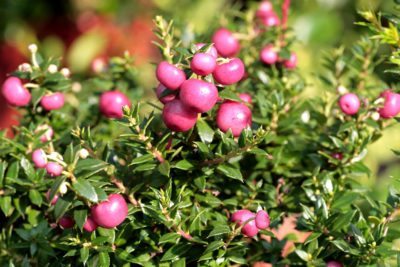 Even scientists don’t know everything about the pernettya bush (Pernettya mucronata syn. Gaultheria mucronata) – like which ones are poisonous. So it is no surprise that many people who hear its name may ask: “What is pernettya?”

Pernettya is a small shrub that produces massive amounts of glistening berries. Growing pernettya plants is not difficult if you site them appropriately. Read on for information about pernettya plant care.

The pernettya bush is a broadleaf evergreen with small, shiny leaves of the deepest green. In some regions, the pernettya’s leaves turn brown or bronze in winter. The plant grows to between 2 and 5 (61 cm. to 1.5 m.) feet tall, depending on site and cultivar.

Pernettya’s bell-shaped flowers appear in late spring, usually in white or red. It is the berries that sell this bush to gardeners, with a wealth of large, shining berries that hang on the shrub all winter and into spring. These berries can be red, pink, white, or lilac, depending on the cultivar. Often when new flowers appear in May, berries from the prior year still decorate the shrub.

A pernettya bush is not difficult to grow. The rules for pernettya plant care are similar to those for blueberries. They do best in full or part sun in peaty, acidic soil, so mix peat moss or organic compost into the soil before planting. Feed with a fertilizer for rhododendrons in late February and early June.

A pernettya bush spreads to about 4 feet (1 m.) wide. In fact, the shrubs spread so quickly and easily by underground runners that they are considered invasive in some regions. Keep this in mind.

Scientists do not agree about whether pernettya berries are toxic or lethal if eaten. While some cultivars may produce poisonous berries, this does not seem to be the case across the board.

Tribal peoples of Central and South America relied on different types of pernettya as a major part of their sustenance, and gardeners continue to eat them today without bad effects. However, scientists warn of toxic consequences like hallucination, paralysis, and death.

In short, there is no definite answer to the question “are pernettya berries poisonous?” Given that, you are probably best off NOT eating them. If you have small children or pets, planting pernettya shrubs may not be a good idea either.