Caring For Wax Mallow: How To Grow A Wax Mallow Plant 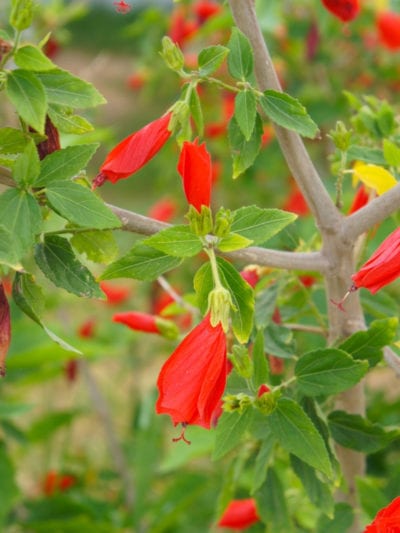 Wax mallow is a beautiful flowering shrub and a member of the Hibiscus family. The scientific name is Malvaviscus arboreus, but the plant is usually called by one of its many evocative common names, including Turk’s cap, wax mallow, and Scotchman’s purse. If you want more wax mallow information, or want to learn how to grow a wax mallow plant, read on.

Wax mallow shrub grows in the wild in the southeastern United States, Mexico, Central America, and South America. It often stays around 4 feet (1 m.) tall, but can grow to 10 feet (3 m.) tall with an equal spread. You’ll find that wax mallow plant care won’t take much of your time.

The stems of the wax mallow are woody toward the plant’s base, but fuzzier and greener toward the branch tips. Leaves can be up to 5 inches (13 cm.) across, but the plant is generally grown for its gorgeous scarlet flowers, which resemble unopened Hibiscus blossoms.

If you are growing wax mallow and looking for blossoms, wax mallow information tells you that the flowers – each about 2 inches (5 cm.) long – appear in summer, attracting hummingbirds, butterflies, and bees. They are followed by small, marble sized red fruit commonly eaten by wildlife. People can also eat the fruit, raw or cooked.

How to Grow a Wax Mallow Plant

If you are wondering how to grow a wax mallow plant, you’ll find that it isn’t very difficult. The plant grows in the wild from the Texas Coastal Plain east to Florida, as well as flourishing in the West Indies, Mexico, and Cuba.

Caring for wax mallow is easiest in these warm areas, where the shrubs are evergreen and flower all year long. In chillier climates, wax mallow grows as a perennial and usually stays about 4 feet (1 m.) tall and wide. Wax mallow plant care depends on your climate and the site where you plant the shrub.

Wax mallow plant care requires the least amount of work if you grow the shrub in moist, well-drained, woodland soils. It is not particular about pH and will also grow in sandy, clay, and limestone soils.

It prefers shady sites but can thrive in full sun. However, its leaves can be darker and puckered in direct sun.