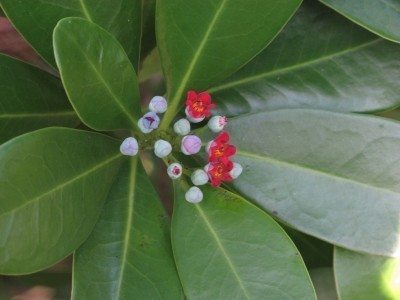 Canella winterana, or wild cinnamon bush, does indeed have flowers, leaves, and fruit that emit a spicy cinnamon aroma when crushed; however, they are not recommended for seasoning food. Moreover, wild cinnamon plants are not related to either Ceylon cinnamon or Cassia, both of which are marketed as cinnamon in the United States. Despite its lack of significance as a spice, wild cinnamon bush has other prized qualities.

Where to Find Wild Cinnamon

Wild cinnamon plants are native to Florida and the tropical Americas and are found from Miami to Key West along the coast to Cape Sable, Florida. The species is listed as endangered in Florida and in general may be difficult to find since it is a lesser used horticultural specimen. Beyond where to find wild cinnamon plants, another question to be answered is “what is wild cinnamon?”

What is Wild Cinnamon?

Wild cinnamon plants are really small trees or large evergreen shrubs that are extremely salt tolerant and drought resistant. It has dense shading foliage of medium green to olive color, making it a great specimen for planting near patios or decks.

Its narrow growth habit makes it an ideal candidate for a screen along a property line. The trunk grows straight up the center with 4 foot (1 m.) or less thin branches jutting off of it. Pruning the wild cinnamon bush will create more of a tree-like appearance.

Although not particularly showy, the flowers of the wild cinnamon bloom in the spring in tiny purple and white clusters that are rich in nectar and attract pollinators. The resulting fruit, bright red berries, hang near the tips of the branches.

Can You Grow Wild Cinnamon?

Yes, you can grow wild cinnamon and, although it may be a bit more difficult to procure, if you live in USDA zones 9b through 12b, down to 26 degrees F. (-3 C.), it’s a wonderful problem free tree to try in the home landscape.

Wild cinnamon plants are propagated by seed, not usually from cuttings. Plant the wild cinnamon in full sun to partial shade in well-draining soil with a high pH similar to its native settings of rocky, dry, coastal areas. Space the wild cinnamon 10 feet (3 m.) apart if you are trying to create a screen.

Irrigate during dry months, but once established the tree is drought tolerant.

Fertilize the tree in the spring and fall to encourage more rapid growth.

An incredible find for the low maintenance gardener or one attempting to create a native garden or habitat, wild cinnamon bush has few major pests or diseases, is non-invasive, tolerates a variety of soils, and requires little to no pruning.