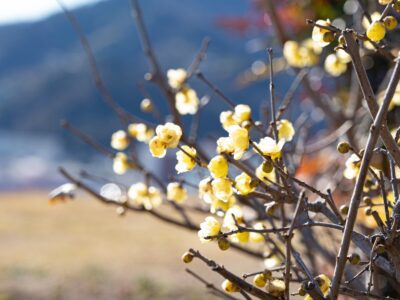 Wintersweet is a modest, little shrub that is full of surprises. It shrugs its way through the normal growing season with only green foliage as an ornament. In the middle of winter, it bursts into bloom and fills the garden with its honeyed fragrance. If you are considering putting wintersweet in the landscape and want some tips on wintersweet plant care, read on.

Wintersweet shrubs (Chimonanthus praecox) are very popular ornamentals in their native land of China. They were introduced to Japan in the 17th century where the plant is called Japanese allspice. Wintersweet is also cultivated in Japan, Korea, Europe, Australia, and the United States.

Wintersweet is deciduous and, although considered a shrub, can grow into a rather small tree of around 15 feet tall (5 m.). It is known for flowering in the middle of winter in sites with appropriate wintersweet growing conditions.

The leaves of this shrub start out green but yellow and drop in late autumn. Then, months later, blossoms appear in early winter on bare branches. The flowers are unusual. Their petals are waxy and butter yellow with touches of maroon on the inside.

If you plant wintersweet in the landscape, you will find that the smell of the fragrant flowers is powerful and delightful. Some say wintersweet flowers have the most beautiful perfume of any plant. However, after the flowers cease, the plant fades into the background. It doesn’t really offer any other ornamental features. For this reason, be sure to plant wintersweet where it can blend in as a background plant.

Plant your wintersweet shrubs in a sheltered sunny location. The shrubs thrive in well-drained soil and accept either acidic or alkaline soils. If your soil doesn’t drain well, amend it with compost before you plant wintersweet shrubs. This makes wintersweet plant care much easier.

Part of wintersweet plant care is pruning. When you are caring for wintersweet in the landscape, trim the oldest branches to the ground after the plant has stopped blooming.