Pruning A Yew Shrub: How To Prune An Overgrown Yew Plant 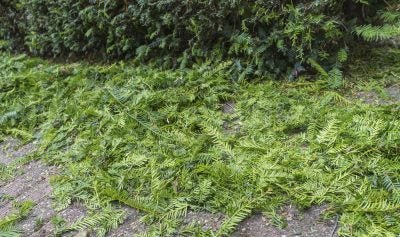 Yew trees (Taxus spp.) are small evergreen conifers with soft, flat needles. Some species resemble small trees while others are prostrate shrubs. These are often used in hedges. Unlike some conifers, yews usually respond well to pruning. If you want to learn about pruning yew bushes, including how to prune an overgrown yew, read on.

The first question when you are pruning yew bushes is when to pick up the pruners. Clipping at the wrong time can have unpleasant consequences. It is safest to start cutting back yews when they are dormant. Late winter is perhaps the ideal time to start pruning a yew shrub.

The types of pruning cuts to use depend on the outcome you desire. To make a yew tree bushier and fuller, just clip off the outer growth. This heading cut stimulates new growth and makes the tree look rounder and fuller.

Be careful not to trim the top of a yew until it has reached your preferred height plus a few inches. If you do, you’ll find that the tree doesn’t regain height very quickly.

Many conifers will not sprout new growth on old wood. Yews do not share that trait. You don’t have to worry about snipping into old wood when you are cutting back yews. Yews sprout new growth readily even when severely pruned. On the other hand, you’ll want to be careful when you are hard pruning a yew. Don’t ever remove more than one-third of the total canopy any one year.

Nor should you start pruning a yew shrub by removing an entire section of its foliage. Instead, when you are pruning yew bushes, snip a little on all sides of each yew to keep it natural looking and healthy.

How to Prune an Overgrown Yew

If you shape your yews annually, you will never have to resort to hard pruning a yew. It’s better to keep cutting back yews gradually, year after year.

That said, if your yews have been neglected, they probably have grown leggy. If you want to know how to prune an overgrown yew like this, it’s not hard. You can snip back branches to the woody areas.

This type of hard pruning a yew is termed rejuvenation pruning. It will rejuvenate your trees and give them renewed vigor and lush, bushy foliage. However, you’ll have to be patient. It may take a few years for the yew to look beautiful and full again.