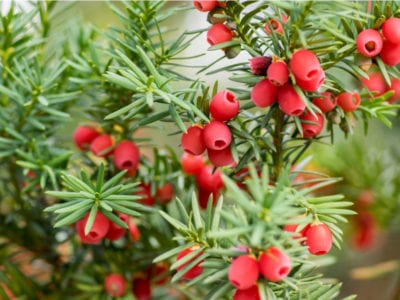 Yew is a great shrub for borders, entranceways, paths, specimen gardening, or mass plantings. In addition, Taxus yew shrubs tend to be drought resistant and tolerant of repeated shearing and pruning, making yew shrub care a relatively easy endeavor. Keep reading for more information on growing yews in the landscape.

The Taxus yew shrub, belonging to the Taxaceae family, is a medium sized evergreen shrub native to the areas of Japan, Korea and Manchuria. The yew has green foliage with bright red berries. All portions of the Taxus yew are toxic to animals and humans, with the exception of the fleshy portion of the arils (the name for the Taxus fruit). The fruit lays hidden amongst the foliage of the female plant until September, wherein the short lived arils turn a striking red shade.

Taxine is the name of the toxin found in the Taxus yew shrubs and shouldn’t be confused with taxol, which is a chemical extraction of the bark of the western yew (Taxus brevifolia) used in cancer treatment.

Taxus x media is notable for its dark green, one inch (2.5 cm.) long evergreen needles. Although an evergreen, the yew’s foliage may winter burn or turn brown in its northern range (USDA plant hardiness zone 4) and melt out in its southern range (USDA zone 8). However, it will again return to its green hue in the early spring, at which time the male yew will shed dense pollen from its small white flowers.

Many cultivars and types of yew shrubs are available to the gardener, so those interested in growing yews will find a variety to choose from.

•If you’re looking for a Taxus x media that’s rounded when young and spreads with age, ‘Brownii’, “Densiformis”, “Fairview”, “Kobelli”, “L.C”, “Bobbink”, “Natorp”, “Nigra” and “Runyanii” are all suggested varieties of yew shrub.

•If you’re desirous of a yew shrub that spreads more rapidly from the get go, “Berryhillii”, “Chadwickii”, “Everlow”, “Sebian”, “Tauntonii” and “Wardii” are cultivars of this type. Another spreader, “Sunburst”, has golden yellow spring growth which fades to chartreuse green with a hint of gold in summer.

•”Citation”, “Hicksii”, “Stoveken” and “Viridis” are excellent choices for upright column-like specimens of the Taxus yew plant. “Capitata” is an upright pyramidal form, which can attain a 20 feet to 40 feet (6 to 12 m.) height by 5 feet to 10 feet (1.5 to 3 m.) width. It is often limbed up to reveal striking purple, reddish brown bark, making a stunning plant at entranceways, large foundations and in specimen gardens.

How to Grow Yew Bushes and Yew Shrub Care

Growing yews can be achieved in zones 4 through 8. While this evergreen shrubs flourishes in sun to partial sun and well drained soil, it is tolerant of most any exposure and soil make up, with the exception of overly wet soil, which may cause root rot.

Yews mature to a height of 5 feet tall by 10 feet (1.5 by 3 m.) wide and almost exclusively pruned into the size desired for a particular location. Slow growing, they can be heavily sheared into a variety of shapes and are often used as a hedge.

As mentioned above, the Taxus yew can be susceptible to root rot and other fungal disease brought on by overly wet soil conditions. In addition, pests like black vine weevil and mites are also issues which may afflict the shrub.

Generally speaking, however, the yew is an easy-care, drought tolerant and highly adaptable shrub available in many areas of the United States.

Printer Friendly Version
Read more about Yews
Next>
Did you find this helpful? Share it with your friends!
FacebookTweetPinEmail
Related Articles
Newest Articles
You might also like…
Additional Help & Information