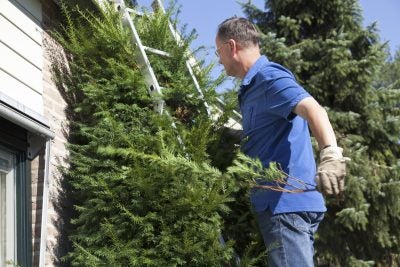 Japanese yew trees (Taxus cuspidata) are long-lived evergreens often selected for specimen shrubs or hedges in U.S. Department of Agriculture plant hardiness zones 5 to 7. Trimming a Japanese yew helps keep it an appropriate size or shape. Read on for tips on cutting back Japanese yews.

Japanese yew cultivars range in size significantly. They can be quite tall or very short. Some cultivars, like ‘Capitata,’ grow tall – up to 50 feet (15 m.). Others, like ‘Emerald Spreader,’ stay short or mounded.

Japanese yew pruning is essential if you want to maintain the shrubs in a formal shape or a smaller size than they would naturally grow. Some gardeners make pruning Japanese yew an annual task, regularly clipping off a few inches (5 to 12.5 cm.) of new growth every year. Others prune harder but less often.

When it’s time for cutting back Japanese yews, pick up the pruners in spring before the new growth begins. Sterilize the blades by wiping them with bleach or alcohol before cutting.

Protect your hands with good gloves since yews contain toxins that are poisonous to humans. Trim your yew into shape by removing dead branches and branch tips.

When you inherit an overgrown Japanese yew tree or put off cutting back Japanese yews too long, you’ll need to do a more severe pruning in springtime. These trees tolerate pruning well, so there is no problem in trimming out up to half of the canopy.

You’ll want to proceed in early spring, using pruners, limb loppers, and pruning saws for hedges, rather than shears. Most branches will be too thick to be removed easily with regular shears.

Take off crossing branches and those that turn toward the inside of the shrub. Prune out very long secondary branches at their points of origin, when this is possible.

If not, try pruning Japanese yews’ branches to an outward-facing side branch or to a bud. This type of pruning allows sun and air into the centers.