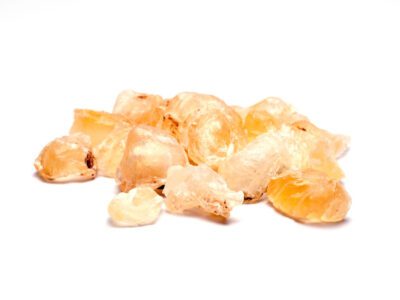 You may have seen the words “acacia gum” on some of your food labels. It is a common ingredient in many processed foods but is also important in some fabric production, pharmaceutical preparations, inks, and even certain pigment manufactures. Acacia gum comes from trees found in tropical Africa. Acacia gum has a long history of natural use in the region and is now easy to find in natural health stores around the world.

What is Acacia Gum?

Acacia gum is also called gum arabic. It is made from the sap of the Acacia senegal tree, or gum acacia. It is used medicinally as well as in the production of many items. In fact, the many acacia gum uses span numerous professional industries. It may even be an important part of everyday health. Further acacia arabic information can help you decide if you should include it in your diet.

Much of the supply of acacia gum comes from the Sudan region, but also from Nigeria, Niger, Mauritania, Mali, Chad, Kenya, Eritrea, and Senegal. It comes from the thorny Acacia senegal tree where the sap bubbles up to the surface of the branches. Workers must brave those thorns to scrape the stuff off the bark as it occurs during the rainy season. The sap is dried using the naturally warm temperatures of the region. This process is called curing.

Countless tons of the sap is sent annually to Europe for processing. There it is cleaned, dissolved in water, and dried again to create a powder. The sap is a cold, water soluble polysaccharide. In its gum form, the product thins out as temperature rises. These variable forms make it useful in a host of products.

Gum arabic was first used in Egypt in the mummification process to adhere the bandage wrappings. It was even used in cosmetics. The substance was used to stabilize paint as early as biblical times. During the Stone Age, it was used as a food and an adhesive. Ancient Greek writings mention its use to relieve discomfort of blisters, burns, and stop nose bleeds.

Later periods found artists utilizing it to bind pigments and in ink. More modern occurrences found it in glue, as part of textile manufacturing, and in early photographic prints. Today’s uses are off the map and gum arabic can be found in most households.

Acacia gum can be found in soft drinks, canned and frozen foods, snacks, and desserts. It is considered a stabilizer, flavor fixer, adhesive, emulsifier, and helps prevent crystallization in sugary foods.

It is high in fiber and non-fat. In non-food use, it is part of paint, glue, cosmetics, carbonless paper, pills, cough drops, porcelain, spark plugs, cement, fireworks and much more. It improves textures, makes a flexible film, binds shapes, negatively charges water, absorbs pollutants, and is a nonpolluting binder when on fire.