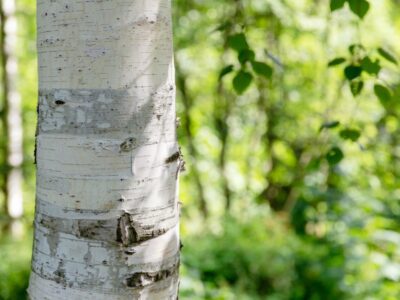 The use of paper birch bark is richly steeped in history. Paper birch was especially useful in the construction of shelters, canoes, baskets, and many other daily necessities. Some native tribes also considered its potential medicinal value. Learning more about paper birch bark can help gardeners and crafters to better understand the tree’s significance, as well as help to ensure that birch plantings within the home landscape are kept thriving.

When to Harvest Paper Birch Bark?

Paper birch trees can be identified by their bright, white bark. Each spring, much of this bark begins to peel back and pull away from the tree. Bark may be collected at other times throughout the year too, but may require additional treatment before its use in crafting.

Is It Bad to Peel Birch Bark?

Understanding the best way to peel birch bark is vital to ensuring the continued health of the tree. The best way to peel birch bark requires careful consideration of details, such as the age of the tree, growing conditions, and its overall health. These factors all impact the thickness and usability of the bark. Many sources suggest collecting only the bark that has already been shed. Since paper birch bark is quite robust, even that which has naturally peeled is often of exceptional quality.

Though paper birch bark can be harvested from live trees, it may be collected from fallen or dead trees, as well. This is more ideal for those concerned about harming live specimens. Since the bark layer of paper birch trees is relatively thin, when you harvest paper birch bark you should make certain to avoid cutting it too deeply. Doing so may cause great damage to the trees, potentially inhibiting the flow of water and nutrients. Most experts agree that bark should easily slip from the tree by creating a short vertical slit.

When peeling birch bark, crafters should make certain not to remove too much from one tree, as this may also cause extensive damage. After harvest, paper birch trees may take up to ten years to completely recover from the peeling process. For this reason, it is widely suggested to learn this task from an experienced professional before attempting it yourself.

Depending on where you live, there may be laws and/or restrictions regarding the harvest and collection of paper birch bark. For some, permits may be necessary. Always make certain to consult local agriculture extension agents regarding potential regulations.