How To Tap Birch Trees: Birch Syrup And Other Uses For Birch Sap 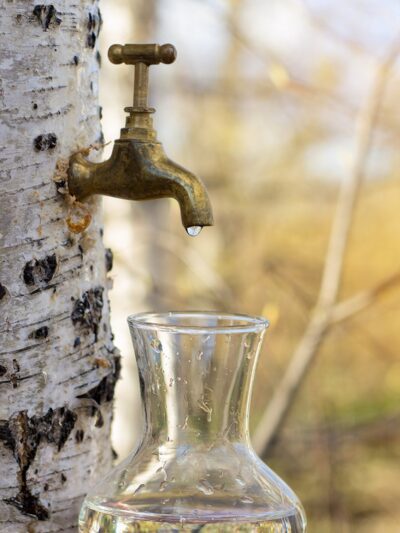 Most people have had or are familiar with maple syrup, the concentrated sap of maple trees, but did you know you can make birch syrup? Birch syrup can be made from paper birches and, while it takes some time, is surprisingly easy to do. Interested in how and when to tap birch trees for syrup? Read on to learn about birch sap harvest for syrup and other birch sap uses.

Birches are hardwood trees commonly found in northern hardwood and boreal forests in areas of the northern hemisphere. The trees are tapped during the birch sap harvest, and then the sap is boiled to concentrate and caramelize the sugars. The result is delicious, albeit much different from maple syrup.

So how does birch syrup taste? The taste of birch syrup is described variously as reminiscent of raspberries, tart cherries, apple butter and molasses or as a combination of balsamic vinegar and molasses with a fruity nuance. Suffice it to say the consumer should not expect the sweet flavor of maple syrup, but something else entirely, with a unique flavor all its own.

Up until the end of the 19th century, a lack of food in the early spring called the “hunger gap” occurred in Europe. To fill the gap, northern Europeans drank the sweet sap of birches. The use of birch sap as a beverage was documented far earlier by the people of boreal and hemiboreal regions of the northern hemisphere as early as 921.  (“Boreal” describes a region that has a northern temperate climate, with cold winters and warm summers.)

While birch sap is not high in vitamins, it is rich in minerals primarily calcium and potassium. It also contains antioxidants, sugar of course, vitamins C and B, and 17 amino acids; much more nutritious than plain water.

When to Tap Birch Trees

Birch sap harvest only occurs at the break between winter and spring when the sap begins to flow: just after the last frost but before the trees begin to leaf out. Birch sap harvest varies a bit depending upon location. In Eastern Europe, March is called “the month of sap” while in the more northern latitudes, April is when birch sap harvest begins.

How to Tap a Birch Tree for Syrup

Tapping a birch tree for syrup is a pretty simple process. Any birch tree can be tapped — just remember that more sap will be needed to create the same amount as maple syrup since birch syrup is lower in sugar.

Another way to tap a birch for syrup is to cut the end of a branch that is 2.5 inches (1 cm.) across. This method yields less sap but is less invasive. With either method be sure to seal the hole with wax or birch tar after tapping.