10 Types Of Birch Trees: Choosing A Birch Variety For Your Backyard 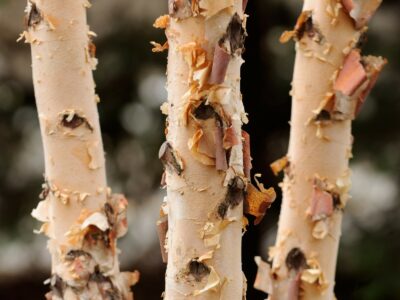 Slender and graceful, birch trees are admired by many gardeners. The birch offers enchantment in all seasons. In spring, its bright green leaflets open together with dangling clusters of catkins. In summer they offer the chiaroscuro of dappled shade, followed by brilliant foliage colors in fall. Their lovely bark is exposed in winter.

What Are the Different Types of Birch Trees?

This is a classic and extremely popular birch, one of the weeping birch varieties. It grows to between 30 and 60 feet (10 and 20 m.) tall and wide. The trunk has lovely white bark with black fissures, and the branches are drooping. The leaves of this birch are green in summer, canary yellow in fall. It prefers a full sun location and well-draining moist soil.

With white peeling papery bark and green leaves, the paper birch looks a lot like the European birch except that its branching structure is upright. It’s a rock-star tree, growing fast and dying young, but very helpful for wildlife, attracting many wild birds and hosting the larvae of Luna moths. Plant in sun and keep the soil moist.

River birch trees have attractive trunks in shades of red from cinnamon to salmon. The bark peels and curls. The foliage is glossy green during summer, then blazes yellow in autumn. This is a birch that tolerates heat, part shade, and some drought, unlike many of its family members.

How about a birch with dark brown bark? The black birch’s bark resembles the bark of a cherry tree but happens to be extremely fragrant with a wintergreen scent. The tree’s green leaves turn golden in fall. It is not one of the small birch varieties and can grow to 90 feet (30 m.) tall.

5. Gray birch (Betula populifolia) resembles the paper birch. However, this species normally grows with multiple trunks and its bark is whitish-gray and doesn’t peel. It will grow in dry and sandy soils, though it, like most birch, prefers moist soil.

If you like birch with peeling bark, consider the yellow birch. Its handsome copper-colored bark peels off in sheets, and it also offers a yellow autumn display. No dry or sandy soils for this native, and no hot sites either. Yellow birch is a tall deciduous tree, its single trunk rising to 80 feet (27 m.) tall, making it one of the largest birches in North America.

Native to Korea and Japan, this species is one of the weeping birch varieties. It is a medium tall tree, growing to 50 feet (17 m.) tall, in USDA zones 3 to 8. It has white bark and thin spreading branches with drooping branchlets. It can thrive in moist, well-drained loam in full sun.

This attractive birch is among the small birch varieties, as it only grows to 25 feet (8 m.) as a shrub and 40 feet (12.5 m.) as a tree. In the wild, water birch trees grow next to streams in mountainous regions in zones 3 through 7. The attractive bark is dark mahogany and smooth, not peeling. Beavers use this tree for food and lodge material.

Another of the small birch varieties, dwarf birch is a native of cool tundra landscapes in USDA zones 1 through 8, including Alaska, Canada, Greenland, and northern Asia. It truly is a dwarf species, topping out at 3 feet (.9 m.) tall. Like most birch, it prefers wet but well-drained soil and full sun.

It’s a winning combination for Himalayan birch: lovely spring flowers, deep gold fall foliage, and bright white papery bark. This medium-sized tree –to 50 feet (17 m.) – grows into a pyramid shape from its single trunk. It thrives best in cooler climates like USDA zones 4 through 7 where the birch is a heartier and longer-lived tree.