Ceylon Cinnamon Care: How To Grow A True Cinnamon Tree 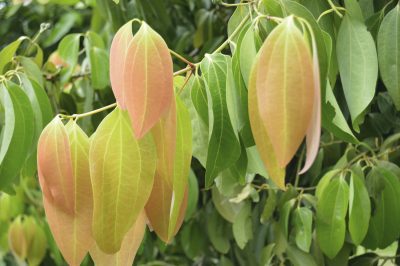 I love the aroma and flavor of cinnamon, especially when it means I’m about to devour a warm homemade cinnamon roll. I’m not alone in this love, but have you ever wondered exactly where cinnamon comes from. True cinnamon (Ceylon cinnamon) is derived from Cinnamomum zeylanicum plants generally grown in Sri Lanka. They are actually small, tropical, evergreen trees and it is their bark which imparts the lovely scent and taste of their essential oils – cinnamon. Is it possible to grow a true cinnamon tree? Read on to find out how to grow cinnamon trees and other Ceylon cinnamon care.

So, I keep mentioning “true” cinnamon trees. What does that mean? The kind of cinnamon usually bought and used in the United States comes from C. cassia trees. True cinnamon comes from Ceylon cinnamon. The botanical name C. zeylanicum is Latin for Ceylon.

Ceylon was an independent country in the Commonwealth of Nations between 1948 and 1972. In 1972, the country became a republic within the Commonwealth and changed its name to Sri Lanka. This island country in South Asia is where most true cinnamon comes from, where Ceylon cinnamon growing is cultivated for export.

There are several distinctions between Cassia and Ceylon cinnamon.

Ceylon cinnamon is light brown in color, is solid, thin, and cigar-like in appearance and has a pleasant delicate aroma and sweet flavor.
Cassia cinnamon is dark brown with a thick, hard, hollow tube and a less subtle aroma and indifferent flavor.

How to Grow Cinnamon Trees

Cinnamomun zeylanicum plants, or rather trees, attain a height of between 32-49 feet (9.7 to 15 m.). Young leaves are lovely with a pink hue at emergence, gradually turning a dark green.

The tree bears clusters of small star-shaped flowers in the spring, becoming small, dark purple fruit. The fruit actually smells like cinnamon, but the spice is actually made from the bark of the tree.

C. zeylanicum thrives in USDA zones 9-11 and can survive frosts down to 32 degrees F. (0 C.); otherwise, the tree will need protection.

Grow Ceylon cinnamon in full sun to part shade. The tree prefers higher humidity of 50%, but will tolerate lower levels. They do well in containers and can be pruned to a smaller size of 3-8 feet (0.9 to 2.4 m.). Plant the tree in an acidic potting medium of half peat moss and half perlite.

Now that you have your tree planted, what additional Ceylon cinnamon care is needed?

Fertilize moderately, as excess fertilizer can contribute to root diseases as can cool temperatures.

Maintain a consistent watering schedule but allow the soil to dry between watering.

Prune the plant as desired to maintain its shape and desired size. Keep an eye on lower temps. If they dip into the low 30’s (around 0 C.), it’s time to move Ceylon trees to protect them from cold damage or death.