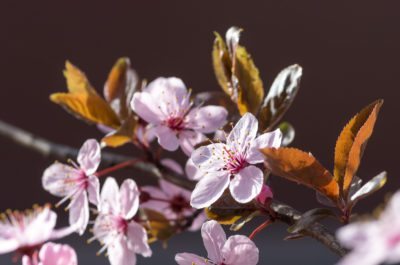 Prunus cerasifera is a true plum tree native to Asia and hardy in zones 4 and 8. They are mostly grown in the landscape as small ornamental trees, though with the correct pollinator nearby, they will produce some fruit. The fruit they produce are plums and have no attributes of a cherry, but still they became known commonly as cherry plum trees.

Popular varieties of Prunus cerasifera are:

While these plum trees make beautiful ornamental trees, they are a favorite of Japanese beetles and can be short lived. They are also not drought tolerant but cannot tolerate areas that are too wet either. Your cherry plum tree care should take these factors into account.

What is a Cherry Plum Tree Hybrid?

In recent years, another tree known as cherry plum has flooded the market. These newer varieties are hybrid crosses of fruit bearing plum and cherry trees. The resulting fruit is larger than a cherry but smaller than a plum, approximately 1 ¼ inch (3 cm.) in diameter.

These two fruit trees were first cross bred to create cherry plum fruit trees in the late 1800’s. The parent plants were Prunus besseyi (Sandcherry) and Prunus salicina (Japanese plum). The fruit from these first hybrids was alright for canning jellies and jams but lacked the sweetness to be considered dessert quality fruit.

Recent efforts of major fruit tree breeders have produced many highly sought-after varieties of delicious cherry plum bearing fruit trees and shrubs. Many of these new varieties have sprung from the crossing of Black Amber Asian plums and Supreme cherries. Plant breeders have given these new varieties of fruit cute names, such as Cherums, Plerries, or Chums. The fruits have dark red skin, yellow flesh, and small pits. Most are hardy in zones 5 to 9, with a couple varieties hardy down to zone 3.

Printer Friendly Version
Read more about Cherry Plum
Next>
Did you find this helpful? Share it with your friends!
FacebookTweetPinEmail
Related Articles
Newest Articles
You might also like…
Additional Help & Information