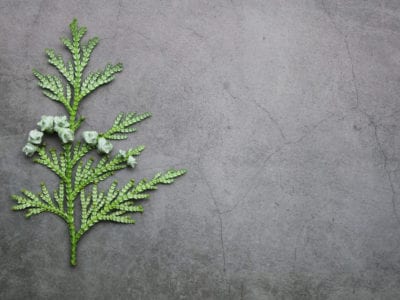 The elkhorn cedar goes by many names, including elkhorn cypress, Japanese elkhorn, deerhorn cedar, and hiba arborvitae. Its single scientific name is Thujopsis dolabrata and it is actually not a cypress, cedar or arborvitae. It’s a coniferous evergreen tree native to the wet forests of southern Japan. It doesn’t thrive in all environments and, as such, it’s not always easy to find or keep alive; but when it works, it’s beautiful. Keep reading to learn more elkhorn cedar information.

Elkhorn cedar trees are evergreens with very short needles that grow outward in a branching pattern on opposite sides of the stems, giving the tree an overall scaled look.

In summer, the needles are green, but in autumn through winter, they turn an attractive rust color. This happens to varying degrees based on variety and individual tree, so it’s best to pick yours out in autumn if you’re looking for a good color change.

In spring, small pine cones appear on the tips of the branches. Over the course of the summer, these will swell and eventually break open to spread seed in the autumn.

The Japanese elkhorn cedar comes from wet, cloudy forests in southern Japan and some parts of China. Because of its native environment, this tree prefers cool, humid air and acidic soil.

American growers in the Pacific Northwest tend to have the best luck. It fares best in USDA zones 6 and 7, though it can usually survive in zone 5.

The tree suffers easily from wind burn and should be grown in a sheltered area. Unlike most conifers, it does very well in shade.