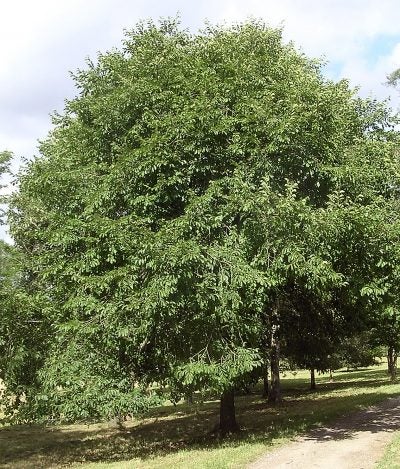 The American elm population has been decimated by Dutch Elm disease, so gardeners in this country often choose to plant Japanese elm trees instead. This lovely group of trees is hardier and equally attractive, with smooth gray bark and an appealing canopy. Read on for Japanese elm tree facts, including information about how to grow a Japanese elm tree.

Japanese elm tree includes not one, but six genera with 35 species of elm native to Japan. All are deciduous trees or shrubs that are native to Japan and northeastern Asia.

Japanese elms are resistant to Dutch Elm disease, a disease fatal to the American elm. One type of Japanese elm, Ulmus davidiana var. japonica, is so highly resistant that it has been used to develop resistant cultivars.

Japanese elm trees can mature to 55 feet (17 m.) tall with a 35-foot (10.5 m.) canopy spread. The bark is grayish-brown and the crown of the tree is rounded and spreads out in an umbrella shape. The fruits of Japanese elm trees depend on the genera and variety of the tree. Some are samaras and some are nuts.

How to Grow a Japanese Elm Tree

If you want to start growing Japanese elm trees, you’ll have the easiest time if you plant the trees in an appropriate location. Japanese elm tree care requires a sunny planting site with well-draining, loamy soil.

If you’re already growing Japanese elm trees in hard clay soil, you aren’t obliged to move them. The trees will survive, but they will grow much more slowly than in rich soil that drains well. The optimal soil will have a pH between 5.5 and 8.

Like other elms, Japanese elm trees need to be watered during extended dry periods. Provide water at the outside edge of their canopies, not close to the trunks. The root hairs of these trees that absorb water and nutrients are found on the root tips. Ideally, irrigate with a drip hose during periods of drought.