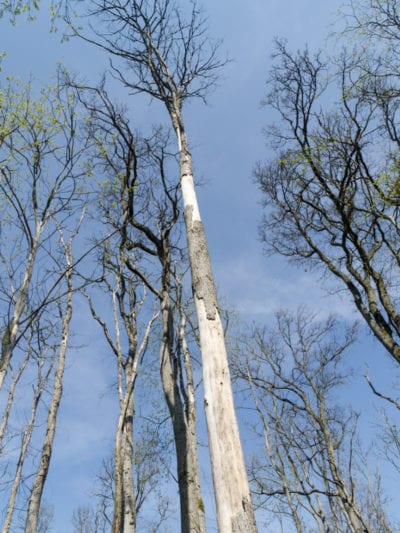 Stately elms once lined the streets of Midwestern and eastern towns. In the 1930’s, Dutch elm disease nearly wiped out these lovely trees, but they are making a strong comeback, thanks in part to the development of resistant varieties. Elm tree diseases still play a major role in the life of the trees and complicate their care. Anyone with an elm in their landscape should know the symptoms of disease so they can address problems promptly.

There are several elm tree leaf diseases that cause spotting, discoloration, and defoliation. By the time the leaves fall from the tree, the spots have often grown together, and other discolorations have developed, making it hard to differentiate between the diseases without a lab test.

Most elm tree diseases that attack the leaves are caused by fungi, but elm leaf scorch, caused by a bacterium, is a little different. With this disease, the bundles of veins in the leaves become clogged so that water can’t move within the leaf. This causes the leaf to look scorched. There is no known treatment for elm tree leaf scorch.

The diseases look similar, with all of the leaves browning on affected branches, but you may be able to tell the difference by the location of the damage. Dutch elm disease usually starts on lower branches, and may appear random, affecting only part of the tree and leaving another part unscathed. Elm phloem necrosis affects the entire crown at once. Agricultural extension services in most areas ask that you report incidences of these diseases.

There is no cure for Dutch elm or elm phloem disease. Trees infected with Dutch elm disease sometimes respond to pruning. This is a treatment that extends the life of the tree for several years if caught early and done properly, but it is not a cure. It’s best to hire a certified arborist for the job. Trees with elm phloem necrosis should be taken down as soon as possible.

Since there is no easy cure, it is important to learn how to protect elm trees from disease. Here are some tips: