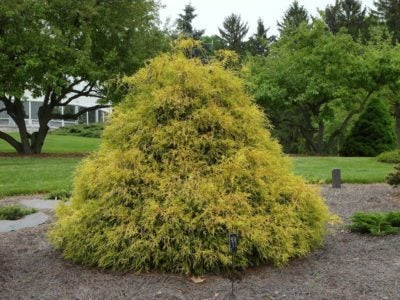 Looking for a small low-growing perennial shrub that is a contrast to conventional green conifers? Try growing Golden Mops false cypress shrubs (Chamaecyparis pisifera ‘Golden Mop’). What is false cypress ‘Golden Mop?’ Golden Mop cypress is a ground hugging shrub that looks a lot like a stringy leaved mop with a gorgeous accent color of gold, hence the name.

The genus name for Golden Mop cypress, Chamaecyparis, comes from the Greek ‘chamai,’ meaning dwarf or to the ground, and ‘kyparissos,’ meaning cypress tree. The species, pisifera, refers to the Latin word ‘pissum,’ which means pea, and ‘ferre,’ which means to bear, referring to the small round cones this conifer produces.

Golden Mop false cypress is a slow growing, dwarf shrub that only grows to 2 to 3 feet (61-91 cm.) tall and the same distance across in the first 10 years. Eventually, as the tree ages, it may grow up to 5 feet (1.5 m.) tall. This plant hails from the family Cupressaceae and is hardy to USDA zones 4 through 8.

Golden Mop shrubs retain their lovely golden hue throughout the year, making them a contrasting addition to the garden landscape and especially nice during the winter months. Small cones appear in the summer on mature shrubs and ripen to a dark brown.

Sometimes referred to as Japanese false cypress, this particular cultivar and others like it are also called thread-leaf false cypress due to the thread-like, dangling foliage.

Golden Mop false cypress should be grown in an area of full sun to part shade in most average, well-draining soils. It does prefer moist, fertile soil rather than poorly draining, wet soil.

These false cypress shrubs can be grown in mass plantings, rock gardens, on hillsides, in containers, or as standalone specimen plants in the landscape.

Keep the shrub moist, especially until established. Golden Mop false cypress has few serious disease or insect problems. That said, it is susceptible to juniper blight, root rot, and some insects.

Printer Friendly Version
Read more about False Cypress
<Previous
Did you find this helpful? Share it with your friends!
FacebookTweetPinEmail
Related Articles
Newest Articles
You might also like…
Additional Help & Information