Ginkgo
By: Becca Badgett, Co-author of How to Grow an EMERGENCY Garden
Printer Friendly Version 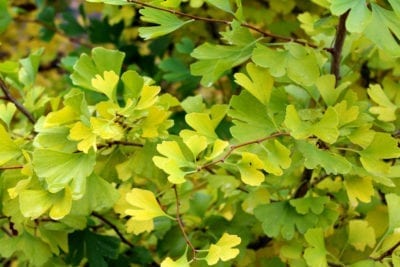 Ginkgo biloba is a strong, long-lived specimen with many uses here in the U.S. It grows as a street tree, on commercial properties, and in the home landscape of many. Sources say it is near perfect as an urban tree goes, as it can grow and thrive in pollution, resists disease, and is easy to prune. However, one thing that’s not so near perfect is its sex.

How to Tell Ginkgo Sex Between Trees

The gingko is a beautiful tree, growing in a diversity of climates. It is the only surviving specimen of the division Ginkgophyta that has not become extinct. There are many instances of prehistoric fossils of this tree being found, some dating as far back as 270 million years. Fossils were found on all continents with the exception of Antarctica and Australia. Needless to say, it’s been around awhile.

You may ask, are ginkgoes dioecious? They are, with both male and female plants. Female plants are the source of the only complaint lodged against this tree, with smelly fruit that drops in autumn. In fact, some street cleaning crews in areas where the trees grow in mass are assigned to pick up the fruit as it drops.

Unfortunately, the growth and dropping of the fruit is also about the only way to tell a ginkgo male vs. female. Described as an offensive, long-lasting smell, the edible fruit is a definitive way to determine the sex of this tree. If your goal is to avoid the foul-smelling, untidy fruit, then you may be wondering about other methods of telling male and female ginkgoes apart.

Flowers in bloom can also give some indication of sex, as the female flower has a single pistil. These trees bear seeds within cones, comprised of seeds on the inside. The outer covering, called sarcotesta, is what emits the stinky smell.

Learning how to tell ginkgo sex has been a course of study for arborists, scientists, and horticulturists alike. The presence of this covered seed is the only way to tell male and female ginkgo differences. A few ‘male only’ cultivars are in development, but this is not foolproof either, as it is proven that the ginkgo trees can change sexes. So even if there is a way of telling male and female ginkgoes apart, that doesn’t mean the sex of the tree is permanent.

Many states in the U.S. and cities in other countries continue to plant ginkgo trees. Obviously, the ease of their growth and inexpensive maintenance overrides the smell of the autumn season.  If you wish to find a male ginkgo for planting, keep an eye on cultivar development. New varieties are on the horizon.