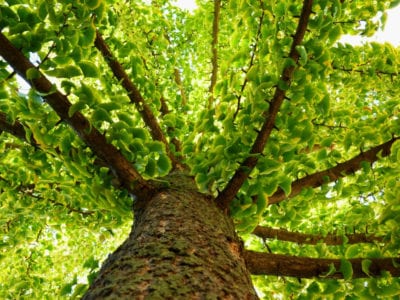 Just what are Ginkgo biloba benefits, what is ginkgo, and how can one grow these useful trees? Read on for the answers to these questions and tips for growing ginkgo trees.

Gingko trees are deciduous, hardy shade trees with unique, fan-shaped leaves which are linked to a primitive family of trees commonly found 160 million years ago in China. Considered to be the world’s oldest living species of tree, geological evidence of ginkgos have been dated to the Mesozoic era, some 200 million years ago!

Ginkgo trees are planted around temple sites in Japan and considered to be sacred. These trees produce an herbal product popular around the world, most specifically in Asian cultures.

The ancient medicinal by-product resulting from ginkgo trees is derived from the seeds of the tree. Long touted for its benefits in improving memory/concentration (Alzheimer’s disease and dementia), Ginkgo biloba purported benefits also include relief from PMS symptoms, eye problems like macular degeneration, dizziness, leg pains associated with circulation issues, Tinnitus, and even MS symptoms.

Ginkgo biloba is not regulated or sanctioned by the FDA and is listed as an herbal product. A note on Ginkgo trees seeds: avoid products that contain fresh or roasted seeds as they contain a toxic chemical which can result in seizures or even death.

How to Grow a Ginkgo Tree

Also called the maidenhair tree, ginkgo trees are long living, drought and pest resistant, and incredibly strong; so strong in fact, they were the only trees to survive following the Hiroshima atomic bomb attack. These trees may grow to a height of 80 feet (24 m.); however, they are slow growers and as such, will work well in many garden areas within USDA zones 4-9.

Ginkgos have a gorgeous, yellow fall color and a spreading habitat that varies, depending upon the cultivar. Autumn Gold is a male cultivar with good fall color, and both Fastigiata and Princeton Sentry® are columnar male forms. Male forms of gingko trees are mentioned, as the fruiting females tend to have an incredibly nasty odor described by many as smelling of, well, vomit. Hence, it is recommended that one plants only male trees.

Ginkgo trees are multi-purpose in their uses as they make wonderful shade trees, specimen plants (including amazing bonsai) and street trees. As street trees, they are tolerant of city conditions such as air pollution and road salt.

Although they may need to be staked when saplings, once they have attained some size, staking is no longer required and the trees may also be transplanted with great ease and no fuss.

As the tree is amazingly easy going about almost everything, including the pH of its soil, gingko tree care does not require a lot of finesse. When planting, ginkgo tree care will include setting in deep, well-draining soil in an area of full to partial sun.

Regular watering and a well balanced fertilizer regime is also recommended, at least until maturation — about the time it reaches 35 to 50 feet (11 to 15 m.) tall! Seriously though, gingko tree care is a simple process and will result in many years of shade from this ornamental botanical “dinosaur.”

Printer Friendly Version
Read more about Ginkgo
Next>
Did you find this helpful? Share it with your friends!
FacebookTweetPinEmail
Related Articles
Newest Articles
You might also like…
Additional Help & Information