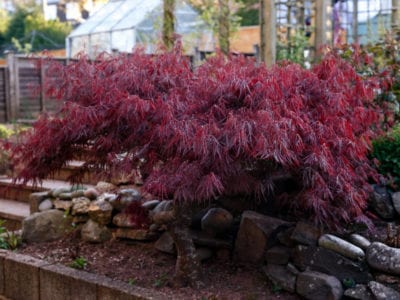 The scientific name of Japanese weeping maples is Acer palmatum var. dissectum, of which there are several cultivars. The weeping variety is both delicate and supple, bearing the lacy leaves on branches that bend gracefully toward the ground.

Most people who plant Japanese weeping maple trees look forward to the autumn show. Fall color can be bright yellow, orange, and red. Even when you are growing Japanese maples in total shade, the fall color can be striking.

How to Grow a Japanese Weeping Maple

You can start growing Japanese weeping maples outdoors unless you live outside U.S. Department of Agriculture plant hardiness zones 4 to 8. If you live in cooler or warmer zones, consider growing them as container plants instead.

When you think about Japanese weeping maples, you’ll realize that the delicately cut leaves will be vulnerable to heat and wind. To protect them, you’ll want to site the tree in a place providing afternoon shade and wind protection.

Be sure the site drains well and follow a regular watering schedule until an extensive root system develops. Most laceleaf varieties grow slowly but are resistant to harm from pests and diseases.

Protecting the tree’s roots is part of Japanese weeping maple care. The way to care for the roots is to spread a thick layer of organic mulch over the soil. This holds in moisture as well and prevents weed growth.

When you are growing Japanese weeping maples, water them regularly, especially in the early days after transplanting. It’s a good idea as well to flood the tree from time to time to leach salt from the soil.