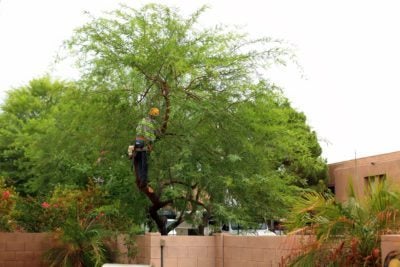 Mesquite (Prosopis spp.) are native desert trees that grow really fast if they get a lot of water. In fact, they can grow so fast that you may need to do mesquite tree pruning every year or so. What happens if you don’t get around to cutting back a large mesquite tree? It gets so heavy and large that it splits in two or falls over. That means that homeowners with these trees in the backyard need to know how to prune mesquites and when to prune a mesquite. Read on for tips on pruning a mesquite tree.

If you don’t get mesquite tree pruning right the first time, you’ll have plenty of second chances. These desert trees can grow between 20 and 50 feet (6-16 m.) tall if they get plenty of water. Tall, full mesquites require annual pruning. On the other hand, it’s a good idea to ease off mesquite irrigation when the tree reaches the size you prefer. The tree will grow less and require less pruning.

How to Prune Mesquite

Pruning depends on the condition of the tree. When you do mesquite tree pruning on a vigorous tree, you might remove some 25 percent of the canopy. If you’ve cut irrigation and a mature tree’s growth is stagnant, you’ll just do some basic pruning.

When you are pruning a mesquite tree, start by removing dead, damaged, or diseased branches. Remove them close to the point of origin.

Use pruning shears or a pruning saw when you are cutting back a mesquite tree branch. If the tree is overgrown or in danger of collapsing under its own weight, remove additional branches – or, in this case, call in a professional.

One important tip for pruning a mesquite tree: wear heavy gloves. Mesquite trunks and branches have large thorns that can do some serious damage to naked hands.

When to Prune a Mesquite

It’s important to learn when to prune a mesquite before you jump into pruning. First, don’t start cutting back a mesquite when you initially transplant it into your garden. Only do essential pruning the first season or two.

When the tree starts growing up and out, start annual tree pruning. Damaged branches can be cut back at any time year-round. For severe pruning, though, you’ll want to do it when the tree is dormant.

Most experts recommend that pruning a mesquite tree should wait until winter when the tree is dormant. However, a few experts claim that late spring is the optimal pruning time since the tree heals wounds more swiftly at that time.