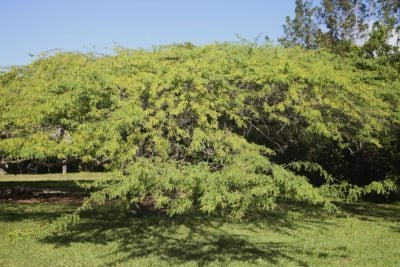 Referred to as “the backbone of xeriscaping” by plant scientists at the University of Arizona, mesquite is a reliably hardy landscape tree for the American southwest. Mesquite trees have a deep taproot to thank for their drought and heat tolerance. Where other trees may wilt and dehydrate, mesquite trees draw moisture from the cool depths of the earth and gracefully ride out the dry spell. However, this deep taproot can make transplanting a mesquite tree quite difficult.

Native to hot, arid areas of North America, South America, Africa, India, and the Middle East, mesquite grows quickly in tough, southwestern exposures where many other trees fail. In fact, the dappled shade provided by some 30 foot (9 m.) tall tree varieties of mesquite can help tender, young plants get established in xeriscape landscapes. Its main drawback is the sharp thorns protecting the tender, young growth of mesquite plants. As the plant matures, however, it loses these thorns.

Mesquite was valued by native tribes for its edible seed pods and hard wood, which was good for building and firewood. Later, mesquite earned a bad reputation from cattle ranchers because its seeds, when digested by cattle, can quickly grow into a thorny colony of young mesquite trees in pastures. Efforts to clear out unwanted mesquite revealed that new plants quickly regenerate from mesquite roots that are left in the ground.

In short, when planted in the right spot, a mesquite tree can be the perfect addition to a landscape; but when growing in the wrong location, mesquite can cause problems. It is problems like this that spark the question, “can you transplant mesquite trees in the landscape?”

Is Transplanting a Mesquite Tree Possible?

Young mesquite plants can usually be transplanted easily. However, their thorns are sharp and can cause long lasting irritation and pain if you are poked while handling them. Mature mesquite trees lack these thorns, but it is nearly impossible to dig out the entire root structure of mature trees.

Roots that are left in the ground can grow into new mesquite trees, and relatively quickly. Taproots of mature mesquite trees have been found growing up to 100 feet (30.5 m.) below the soil surface. If a large mesquite tree is growing where you do not want it, it will be much easier to simply remove the tree altogether than to try to transplant it to a new location.

Smaller, younger mesquite trees can be transplanted from an undesirable location to a better suited site. To do this, prepare the tree’s new site by pre-digging a large hole and adding any necessary soil amendments. About 24 hours before moving mesquite trees, water them thoroughly.

With a clean, sharp spade, dig widely around the mesquite root zone to ensure that you get as much of the root ball as possible. You may have to dig quite deeply to get the taproot. Immediately, put the mesquite tree in its new planting hole. While doing so, it is important to try to position the taproot so that it will grow straight down into the soil.

Slowly backfill the hole, lightly tamping down the soil to prevent air pockets. Once the hole is filled, water the newly planted mesquite tree deeply and thoroughly. Watering with a rooting fertilizer can help reduce transplant shock.