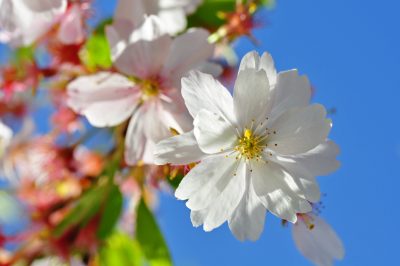 What are Flowering Cherry Trees?

Ornamental cherries are flowering cherry trees that are closely related to orchard cherry trees but are not grown for their fruit. Rather, ornamental cherries are grown for their ornamental properties, particularly their springtime floral displays. Ornamental or flowering cherry refers to several species of Prunus trees along with their cultivars. Most of these Prunus species hail from Japan.

Although some types of flowering cherry produce fruit, it is usually too tart for human consumption. That doesn’t apply to birds, however.  Many birds such as robins, cardinals, and waxwings find the tangy fruit very much to their liking.

Many ornamental cherries are notable not only for their gorgeous spring blooms but also for their wonderful fall color with foliage that turns red, purple, or even orange.

Ornamental cherry trees can be grown in USDA zones 5 to 8 or 5 through 9 in the west. Trees should be planted in full sun in well-draining soil and protected from strong winds. When choosing a tree, be sure to select one that is recommended for your zone and consider the eventual height and breadth of the tree at maturity. Ornamental cherries get from between 20 and 30 feet (6-9 m.) in height and live from between 25 and 50 years.

Flowering cherries do very well in the home garden, as their care is nominal. Water them thoroughly after planting and until the tree has been established. As with cultivated orchard cherry trees, flowering cherries are susceptible to both insect and disease issues.

Prune to thin out branches and improve air and light circulation as well as to remove any dead or diseased branches. Treat any fungal diseases with an application of fungicide. Take care not to damage the fragile bark with mowers or string trimmers.

Apply fertilizer regularly and be consistent with irrigation to minimize stress on the tree which can encourage pests and disease.

As mentioned, the first trees planted in Washington, D.C. were Yoshino cherries, but they are only one of several types of cherry.

Yoshino cherry trees (Prunus x yedoensi) can grow 40 to 50 feet (12-15 m.) tall and wide usually with a rounded, spreading habit although some cultivars have a weeping form. They are also short-lived trees surviving 15 to 20 years of age. Cultivars of Yoshino include:

Higan cherry trees (P. subhirtella) are the third type of flowering cherry. They will attain heights of between 20 and 40 feet (6-12 m.) and 15 and 30 feet (5-9 m.) across and may be upright and spreading, rounded, or weeping in habit. They are the most heat, cold, and stress tolerant of all the cherries and live longer than the others. Higan cherry cultivars include: