Ornamental Pear
By: Becca Badgett, Co-author of How to Grow an EMERGENCY Garden
Printer Friendly Version 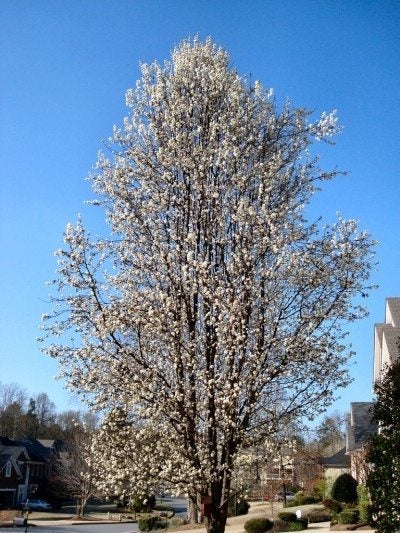 Caring for Bradford pear trees to avoid this scenario requires heavy pruning and thinning of canopy branches. This does not guarantee that the Bradford pear tree is a good idea for the long term. Branches typically have a crowded stature on the often multi-stemmed tree and can be dangerous when falling or splitting off during minor storms.

If you must have one, planting is best done in an area where there is little to damage once the limbs break and fall. Flowering Bradford pears make an attractive border on a large property or a wildlife-friendly screen away from roads and driveways.

Deciding how to plant Bradford pear tree and where to locate it should involve planting away from structures and utility lines. Prepare for caring for Bradford pear trees with heavy, annual pruning to keep the canopy as thin as possible. Do not expect the lifespan of the tree to extend beyond 15 to 25 years.

The difficult task of caring for Bradford pear trees can be eliminated by planting stronger, longer lasting ornamental trees such as white dogwood or serviceberry. Now that you have this Bradford pear tree information, you can make an informed decision before adding this tree to your landscape.

Printer Friendly Version
Read more about Ornamental Pear
Next>
Did you find this helpful? Share it with your friends!
FacebookTweetPinEmail
Related Articles
Newest Articles
You might also like…
Additional Help & Information