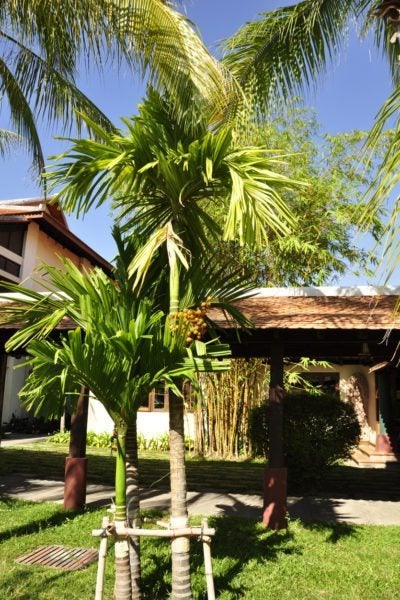 The pindo palm is also called a jelly palm. It is an ornamental plant that produces fruits eaten by both people and animals. Potassium and manganese deficiencies are common in these palms, but sick pindo palm trees may also have disease symptoms. Fungus or occasional bacteria are usually the causes of diseased pindo palm plants. Read on for more information on pindo palm disease and what to do for prevention and control.

Most often, pindos that appear sick are actually suffering from nutritional deficiencies of some sort. Should this not be the case, your next culprit is fungus. Additional disease issues may come from bacterial infections.

A pindo palm that exhibits extensive leaf drop may be deficient in potassium. This shows up as gray, necrotic tips on leaflets and progresses to orange-yellow speckling. Primarily, the newest leaflets are affected. Manganese deficiency is less common but occurs as necrosis in the basal part of young leaves.

Both are easy to correct by performing a soil test to accurately diagnose the deficiency and using a fertilizer with a higher concentration of the missing nutrient. Read the preparation packaging carefully to ensure delivery of the nutrients. Feed plants in early spring to prevent future issues.

Pindos primarily grow in warm, humid regions. Such conditions promote fungal growth, which can cause diseases of pindo palms. The elegant foliage is most often symptomatic, but the pathogen introduced through soil and the roots is working its way up the plant slowly. In most cases, early observation of disease can help diagnose and treat the issue before the plant is severely affected.

It is because of their preferred regions fungal diseases of pindo palms are the most prevalent issue. Fusarium wilt, which affects many types of plants, is one of the most concerning, as it causes death of the tree. Symptoms are one-sided death of old leaves.

Root rot diseases are not uncommon. Like fusarium, pythium and phytophtora fungi live in soil. They cause rot in stems and leaf wilt. Over time the roots will become infected and die. Rhizactonia enters the roots and causes root and stem rot. Pink rot causes pink spore formations at the base of a tree.

Each of these lives in soil and a good fungicide soil drench early in the season provides good control in sick pindo trees.

Leaf spot develops slowly and causes black and yellow spots on the foliage. The dark leaf spots have a distinctive halo around them. This disease spreads through infected tools, rain splatter, insects, and human or animal contact.

Good sanitation practices can be very effective in reducing the advance of the disease. Avoid watering the leaves of pindo palms to prevent splashing and overly wet leaves which form a perfect host for the bacteria.

Prune off infected leaves with clean tools and dispose of them. A diseased pindo palm with bacterial leaf spot can experience reduced vigor due to some foliage loss but it is primarily a cosmetic disease.