How To Prune Weeping Conifers – Tips For Training A Weeping Pine 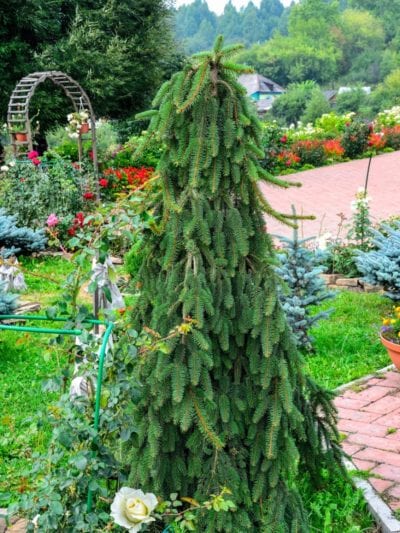 A weeping conifer is a delight all year long, but especially appreciated in the winter landscape. Its graceful form adds charm and texture to the garden or backyard. Some weeping evergreens, like pines (?Pinus? spp.), can become quite large. Pruning weeping pine trees is not that different from other evergreen pruning, with certain important exceptions. Read on for tips on how to prune weeping conifers.

If you are wondering how to prune weeping conifers, start with the most important cuts. Like with all trees, weeping pines pruning includes removing their dead, diseased, and broken branches. This type of pruning should be done as soon as the problem presents itself. It can be done at any time of the year.

Another important aspect of weeping pine tree prune procedure involves cutting back branches that touch the soil. This type of weeping conifer pruning should be done in late winter or early spring. These low conifer branches will start growing as groundcover in the soil or mulch. Prune out these branches at junctions with other branches at least 6 inches (15 cm.) above the soil surface.

Training a tree involves pruning while the tree is young to set up the framework of the tree. Training a weeping pine or other conifer is essential to help the tree develop a central trunk.

The way to tackle this task is to cut out any low branches that develop at the trunk while the tree is still young. Make a cut that leaves no more than a quarter inch (6 mm.) stub to safeguard the tree from disease. Training a weeping pine should be done during the tree’s dormancy, in the winter.

Thinning a weeping conifer is also important to open up the canopy to airflow. This reduces the chance of needle disease. For weeping conifers, thinning also keeps the tree from becoming too heavy, especially important in areas that get a lot of winter snow. To thin the tree, take some shoots back to the joint.

Part of how to prune weeping conifers is a short list of moves to avoid. Never cut the top of the central leader, the topmost vertical twig. Always take care with pruning low branches of weeping pines back into lower bare areas. Pines rarely spout new buds and needle clusters from barren branches or the lowermost branches.

Printer Friendly Version
Read more about Pine
<Previous
Did you find this helpful? Share it with your friends!
FacebookTweetPinEmail
Related Articles
Newest Articles
You might also like…
Additional Help & Information