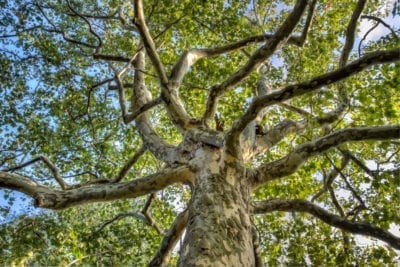 London plane trees are notable in their ability to withstand pollution, drought, and other adverse conditions. The first hybrid appeared in London in around 1645 where it quickly became a popular urban specimen due to its ability to acclimate and even thrive in the city’s sooty air. Resilient the London plane tree may be, it is not without its share of problems, specifically disease.

As mentioned, plane tree diseases tend to mirror those that afflict its close relative the Oriental plane and American sycamore tree. The most devastating of these diseases is called canker stain, which is caused by the fungus Ceratocystis platani.

Said to be as potentially deadly as Dutch elm disease, canker stain was first noted in New Jersey in 1929 and has since become widespread throughout the northeastern United States. By the early 70’s, the disease was being seen in Europe where it continued to spread.

Fresh wounds caused by pruning or other work open the tree up for infection. Symptoms appear as sparse foliage, small leaves, and elongated cankers on the larger branches and trunk of the tree. Underneath the cankers, the wood is bluish black or reddish brown. As the disease progresses and the cankers grow, water sprouts develop beneath the cankers. The eventual outcome is death.

How to Treat a Sick Plane Tree with Canker Stain

The infection occurs most commonly in December and January and opens the tree up to secondary infections. The fungus produces spores within days that readily adhere to tools and pruning equipment.

There is no chemical control for canker stain. Excellent sanitation of tools and equipment immediately after use will help to quell the spread of the disease. Avoid the use of wound paint that can contaminate brushes. Only prune when the weather is dry in December or January. Infected trees should be removed and destroyed immediately.

Another less deadly disease of plane trees is anthracnose. It is more severe in American sycamores than in plane trees. It exhibits as slow spring growth and is associated with wet spring weather.

Visibly, angular leaf spots and blotches appear along the midrib, shoot, and bud blight and splitting stem cankers on twigs appear. There are three stages of the disease: dormant twig/branch canker and bud blight, shoot blight, and foliar blight.

The fungus thrives in mild weather when the tree is dormant; fall, winter, and early spring. During the rainy season, fruiting structures mature in leaf detritus from the previous year and in the bark of blighted twigs and cankered branches. They then disperse spores that are carried on the wind and via rain splash.

Cultural practices that increase air flow and sun penetration, such as thinning, can reduce the incidence of the pathogen. Remove any fallen leaves and prune out infected twigs and branches when possible. Plant resistant cultivars of London or Oriental plane trees which are considered to be resistant to the disease.

Chemical controls are available to control anthracnose but, generally, even highly susceptible sycamores will produce healthy foliage later in the growing season so applications are not usually warranted.