What Are Burrknot Borers: Symptoms And Causes Of Burrknot In Trees 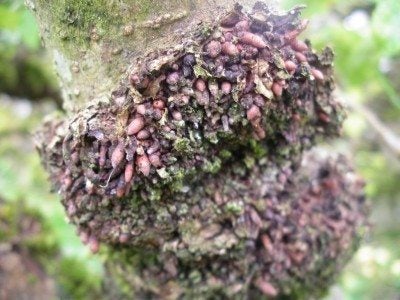 Grafted trees are prone to many strange tricks, sometimes sending out angry-looking spines or armies of water sprouts like tiny soldiers emerging from the bottom of the tree. Burrknot of trees occurs when these rootstocks push out incomplete clusters of aerial roots, forming a rough, roundish area below the graft. Generally speaking, these burrknots aren’t harmful, unless burrknot borers are in the area.

Burrknot borers, more commonly known as dogwood borers, are the larval form of a clearwing moth. Females lay eggs that will hatch in a little over a week in burrknots on trees. When the tiny larvae emerge, they bore into the burrknot, pushing out a rust-colored frass as they go. This discoloration on the surface of the burrknot may be the first and only sign of infestation.

Sites that have been used for breeding over many generations may allow the tree to be girdled over time, as larvae dig deeper and deeper through the burrknot, into healthy tissues. Chronically infested trees may slowly decline and, if they’re fruiting species, gradually show a drop in their production as the infestation expands.

Burrknots commonly appear on grafted trees, no rootstock appears to be immune. High humidity and shading of the graft union tend to encourage formation of these structures. Many growers mound a wide cone of soil around the exposed portion of the rootstock to encourage these burrknots to develop fully into roots, reducing their risk of harboring borers.

Treatment for burrknot borers can be difficult since they spend most of their lives inside of host trees, but pheromone traps can help detect adults on the move. Place these about 4 feet (1 m.) above the ground early in the season so you’ll be ready when it’s time to spray. A single application of chlorpyrifos directly on and around the burrknots after the first dogwood borer appears in your trap should be sufficient for the rest of the season.

You can prevent dogwood borers from infesting burrknots by applying a white coat of latex paint to the rootstock of any trees at risk and providing them with excellent care. Like other borers, dogwood borers prefer trees that are stressed and will seek them out above all others.