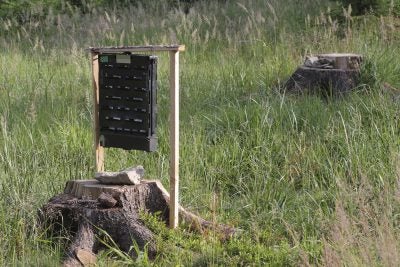 Are you confused about pheromones? Do you know how they work and how they can help you control insects in the garden? Find out about these amazing, naturally occurring chemicals in this article.

What are Pheromone Traps?

Since insects don’t have organs to detect smells like our noses do, it’s more accurate to think of pheromones as communication chemicals rather than scents. An insect releases the chemicals into the air in hopes that another insect will receive the message through sensors on their antennae. Insects use pheromones to send messages such as the location of territorial boundaries and food sources as well as to announce their availability as a mate.

Scientists have isolated the pheromones that attract many of the most destructive garden insects. We can use the pheromones to bait traps, which can then attract and trap the pests. The effectiveness of pheromone traps depends on the species of insect we are trying to control and the way we use the traps.

Are pheromone traps safe? Absolutely. In many cases, they can eliminate or reduce the need for toxic chemical sprays. There are three main ways of using pheromone traps in gardens:

Perhaps the most effective use of pheromones in the garden is to attract males away from females that are ready to breed. Once we interrupt the breeding cycle, we effectively eliminate the insect pest.

The most obvious but, sometimes, the least effective use of pheromone traps for insects is to eliminate large numbers of pests from the garden. Mass trapping is effective against a number of insect pests, but for many more, it can’t do the whole job and needs to be used in conjunction with another pest control method.

Are you ready to try pheromone traps in your garden? First, identify your insect. Pheromone traps work against a specific species of insect, such as a Japanese beetle or a codling moth. You won’t find traps that will work against more than a few closely related insects, and most only work on a single species.

The pheromone bait inside the trap has a limited period of effectiveness. They seldom last beyond two months. Wait until you can reasonably expect the insect to show up in the garden, and change the bait when it is no longer effective.

Read the instructions carefully. You’ll find essential information such as how high and how far apart to hang the lure. The instructions will also help you with timing. Knowing your insect and the way your trap works will increase your success with pheromone traps.