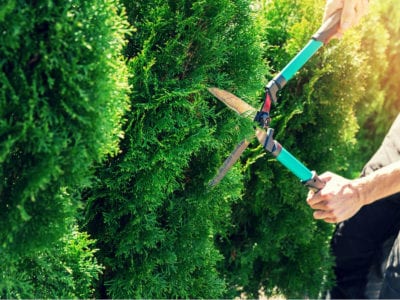 While pruning deciduous trees is almost an annual ritual, pruning coniferous trees is rarely required. That’s because the tree branches usually grow in well-spaced and lateral branches have little effect on the growth of the central leader. Sometimes, though, cutting back conifer trees is necessary.

Pruning a conifer is quite different from pruning a broadleaf tree. A broadleaf tree requires pruning to create a stable structure for the tree, correct the spacing of lateral branches, and to make sure no branches push out the center leader. Pruning can also be done to balance the shape of the tree or reduce its size.

Conifers generally don’t need this type of pruning since they grow in a pyramid shape, making random shaping unnecessary. The lateral branches of conifers are naturally spaced appropriately. Finally, given the growth pattern of a conifer, it is hard to prune a conifer to reduce its size unless you are sheering a hedge.

This doesn’t mean that you should never take pruners to a conifer. Pruning of conifers can be very important, especially when you are cutting back conifer trees to remove dead wood or damaged branches. It is just as important to take out dead and dying branches in conifers as in broadleaf trees. This type of pruning is partially for aesthetics, but safety also plays a role. Pruning out failing limbs prevents them from collapsing and endangering people nearby or the tree itself.

When and How Can I Prune Conifers?

We often have readers ask us, “can I prune conifers?”. Of course, you can! The trick is to make sure that you only do pruning of conifers when it is absolutely necessary. That’s because conifers do not have latent buds like broadleaf trees do that will grow into a full branch after pruning. Absent visible buds on a conifer, old wood that you prune, will likely remain a bare stub rather than a place from which new growth will sprout.

When is pruning coniferous trees appropriate? Many people like to prune out lower branches to allow for passage below the tree as the tree becomes mature. Done correctly, this pruning will not weaken the tree.

It is also a good idea to prune a conifer if it has twin leaders. Select one of the two and remove it to allow the other to take over. Use clean, sharp, sterilized equipment and err on the side of conservative pruning. You can always remove more later.