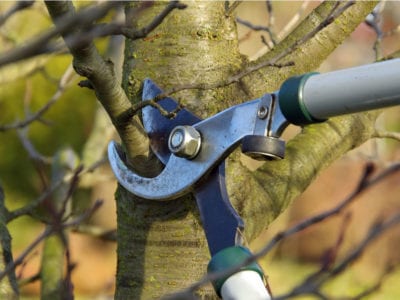 When to Cut Back Mature Trees

Most young tree pruning is done to build a strong, stable branch structure or to create a desired shape or form. On the other hand, the purpose of trimming a mature tree usually involves size control and safety.

Trees that were pruned appropriately when young rarely require major structural pruning. Weak branches have been removed and the tree’s shape is balanced and pleasing. You may wonder then, why prune mature trees at all?

Pruning mature trees requires more knowledge and skills than pruning smaller trees. Anyone interested in learning about trimming a mature tree needs to invest a little time and effort learning how.

A good rule of thumb is never to remove any live foliage from an adult tree unless you have a good reason to do so. That means that the first step in mature tree trimming is to determine exactly why you are pruning. That will dictate the type of cuts you will make.

For example, pruning to open up the canopy and allow in more sunlight should not involve the removal of any big branches, only smaller branches toward the canopy edge. Removal of large branches and older branches often leads to decay.

How to Prune Mature Trees for Height

When you decide to get to work trimming your mature tree in order to shorten its height do not even think of topping it. Topping is very bad for a tree’s health, creates an unhealthy and unattractive branch structure, and takes many years to “undo.”

Instead, reduce the crown by pruning out entire branches at their points of origin from the trunk or another branch at least three times the diameter of the branch removed. Make the cuts outside the branch collar, the swollen area at the base of the branch. This helps the tree heal the wound.

How to Prune Mature Trees for Clearance

If you need more clearance under a mature tree to allow for cars or foot traffic you need to raise the crown. Shortening or removing low branches can raise the crown, but make sure you don’t take out too many. Two-thirds of the total height of the tree must still have living branches.

If you need to take out thick branches, use a three-cut pruning process.