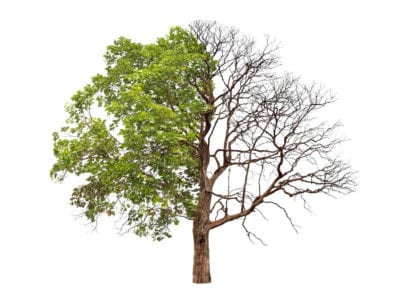 If a backyard tree dies, the mourning gardener knows they must remove it. What about when the tree is dead on one side only? If your tree has leaves on one side, you’ll first want to figure out what is going on with it.

While a half dead tree might be suffering from a variety of conditions, the odds are that the tree has one of several serious root issues. Read on for more information.

Why One Side of Tree is Dead

Insect pests can cause serious damage to trees, but they rarely limit their attack to one side of a tree. Similarly, foliage diseases tend to damage or destroy the entire canopy of a tree rather than only half of it. When you see that a tree has leaves on one side only, it is not likely to be an insect pest or leaf disease. The exception might be a tree near a border wall or fence where its canopy can be eaten on one side by deer or livestock.

When you see that a tree is dead on one side, with limbs and leaves dying, it may be time to call in a specialist. You are likely looking at a root problem. This can be caused by a “girdling root,” a root that is wrapped very tightly around the trunk below the soil line.

A girdling root cuts off the flow of water and nutrients from the roots to the branches. If this happens on one side of the tree, one half of the tree dies back, and the tree looks half dead. An arborist can remove some of the soil around the tree’s roots to see if this is your problem. If so, it may be possible to cut the root during the dormant season.

Other Causes for Half Dead Tree

There are several types of fungi that can cause one side of a tree to look dead. The most prevalent are phytophthora root rot and verticillium wilt. These are pathogens that live in the soil and affect the movement of water and nutrients.

These fungi can cause a decline or even the death of the tree. Phytophthora root rot appears largely in poorly drained soils and causes dark, water-soaked spots or cankers on the trunk. Verticillium wilt usually affects branches on only one side of the tree, causing yellowing leaves and dead branches.