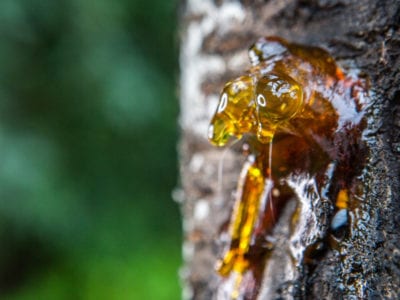 Sometimes older trees end up growing in adverse conditions or conditions that aren’t perfect for that particular tree. The tree may have become too large for the area it is growing in, or perhaps at one point it received nice shade and now is larger and gets too much full sun. The soil may have become old and unconditioned and doesn’t nourish the tree like it used to.

All of these things can cause a tree to start showing signs of bacterial wetwood. Bacterial wetwood (also known as slime flux) is not usually serious but can be a chronic disease that can eventually cause the tree’s decline if it isn’t watched.

Why Do Trees Ooze Sap When Infected with Bacterial Wetwood?

Why do trees ooze sap? The bacterial wetwood will cause cracks in the wood of the tree where sap starts oozing out. The running sap seeps out of the cracks slowly and will flow down the bark, robbing the tree of nutrients. When you see a tree bleeding sap, you know there is a problem and it most likely is bacterial wetwood.

Usually when you see the a tree bleeding sap and dark bark areas around the area where the sap is leaking, it’s not very significant except that it ruins the look of the tree. It usually won’t kill the tree until bacteria starts to form. Once this happens, you’ll see a gray-brown, foamy liquid called slime flux. Slime flux can prevent cracks in the bark from healing and will also prevent the formation of calluses.

When it comes to a tree bleeding sap or slime flux, there is no real cure. However, you can do a few things to help the tree that is suffering from bacterial wetwood. The first thing to do is to fertilize the tree, since the problem is often caused from lack of nourishment. Fertilizing will help to stimulate the tree’s growth and lessen the severity of the problem.

Second, you can alleviate slime flux by installing drainage. This will help to relieve the pressure from the gas that forms, and allow the drainage to flow away from the tree instead of down the trunk. This will also help to alleviate the spread of bacterial infection and toxins to the healthy parts of the tree.

A tree with bleeding sap is not a sure indication that it’s going to die. It simply means it’s been injured and hopefully, something can be done about it before the problem becomes chronic or fatal.