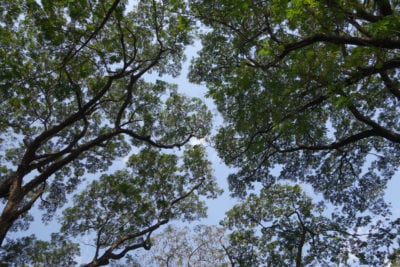 Have there ever been times that you just wanted to set a 360 degree no touch zone around yourself? I feel that way sometimes in super-crowded situations such as rock concerts, state fairs, or even the city subway. What if I told you that this human sentiment for personal space also exists in the plant world– that there are trees that don’t touch each other deliberately? When trees have an aversion to being “touchy feely,” it’s referred to as crown shyness in trees. Read on to learn more and discover what causes crown shyness.

What is Crown Shyness?

Crown shyness, a phenomenon first observed in the 1920’s, is when the crowns of trees do not touch. What exactly is a crown though? It is the uppermost part of the tree where branches grow out from the main trunk. If you were walking in the forest and looked up, you would be looking at the canopy, which is a collection of crowns. Typically, when you look into the canopy, you see an intermingling of branches between the crowns of the trees.

Not so with crown shyness– the tops of the trees simply do not touch. It is an eerie phenomenon to behold and if you were to see photos on the internet, you may question: “Is crown shyness real or is this photoshopped?” I assure you, crown shyness in trees is real. When you peer into the canopy, it looks like each tree has a halo of uninterrupted sky around its crown.

Others have likened the appearance to a backlit jigsaw puzzle. Whatever description strikes your fancy, you get the general idea– there is a definitive separation and boundary, or “no touch zone,” around each tree crown.

Well, no one is really sure what causes crown shyness, but multiple theories abound, some of which are more plausible than others:

What are Some Trees That Don’t Touch?

After reading this article, I’m sure you’re already putting on your hiking boots ready to journey into the woods in search of crown shyness in trees. You may discover that this phenomenon is somewhat elusive, causing you once again to question “Is crown shyness real?”

This is due to the fact that only certain types of towering trees seem predisposed to crown shyness, such as:

It occurs primarily in trees of the same species but has been observed between trees of different species. If you are unable to view crown shyness in trees firsthand, google some of the places renowned for this phenomenon such as the Forest Research Institute of Malaysia, in Kuala Lumpur, or the trees at Plaza San Martin (Buenos Aires), Argentina.